Laura and Jason Sinclair did not want to be transported from Earth, but their alien hosts have plans to take them even further beyond their comfort zone.

They are on a space station, orbiting a mysterious planet in a strange new galaxy. And they must battle for the future of a group of humans who are being used in a breathtaking scheme of cosmic survival—for both aliens and humans alike. And in the process, they will determine the future of Earth.

To succeed, they must solve the puzzle of extraterrestrial races in the throes of a perplexing and historic conflict.

But who can they really trust as they struggle to understand the challenging and hostile environment that holds them in a grip of iron?

If you like Close Encounters, Contact, and Arrival, then you’ll love Amidst Alien Stars, the standalone second novel of a gripping new alien interaction series from Clayton Graham.

“There is world building of such depth and lush detail that you could almost feel it.” Kay Mack TOP 1000 REVIEWER

“Not only is this an exciting, action-packed page turner – I love the intelligence reflected, the witty dialogue, and the genuine depth in the characters’ emotions.” Meenaz Lodhi

“Admirable world-building and the unsurpassable, indefatigable, drive of the human spirit to not just survive, but to thrive, power this engrossing sequel to the author’s debut science fiction novel, Milijun.” Mallory A Haws

There is lots of intrigue, action, conflict and subterfuge in this energetic book that follows on from the first book, Milijun, and although the first book no doubt sets out the history to the current story, it works as a standalone with enough explanations to provide a smooth transition. Jason clearly has a destiny and we follow his journey in this fascinating tale.

The author, Clayton Graham, has a real skill in developing characters from the abducted humans to the taciturn various alien beings, to even hinting at character traits in the robotic RNasias. The descriptive writing is excellent, truly painting a picture of this other world and its strange inhabitants in the reader’s mind and transporting them to a realm where anything could happen and probably will. Clayton Graham has woven such an intriguing story with such believable characters that he must have an incredible imagination. There is such real depth to the story that one could imagine looking out on a clear night and seeing the glint of the space station amongst the stars.

I must admit I would not normally read this genre, but Clayton Graham has reeled me in with his other-worldly creation, causing me to say unreservedly that lovers of science fiction/fantasy will relish this one, and if they have not already done so, have them racing to read Book one also. Be prepared to leave the world as you know it behind and enter another where an alien could become your best friend or your worst enemy.

Author Clayton Graham has created a superbly exciting sequel in the throes of deep space, which encompasses the best qualities of both space opera personal dramas and the hard science fiction of alien wars and political battles. On the one hand, you have Laura and her fellow humans, terrified and determined to survive, who are portrayed with realistic grit and terror, their atmosphere oppressive and dark. On the other, we look into the wider world of the races that seek to control those alien stars and the worlds that look upon them, with a plot structure that makes good sense and leaves lots of room for twists, disasters, and dangers of its own. In this combination, Amidst Alien Stars becomes a fully rounded work of science fiction that is sure to tick the boxes for many fans of the genre: a recommended read.

Milijun Book Two: Amidst Alien Stars is finally here. Laura Sinclair and her son Jason desperately try to navigate the dangerous planet where aliens threaten not only their survival, but the whole human race. Chapter One finds Laura “studying the growth tanks” where each hybrid child will grow to maturity, every one imprinted with her son’s DNA. Now in her forties, she finds herself grandmother to them all.

I encourage you to read Milijun: Book One and follow it up with Amidst Alien Stars: Milijun Book Two. Author Clayton Graham will capture your imagination, take you on an adventure with characters that are both human and alien, with a story so philosophical that it almost defies fiction. 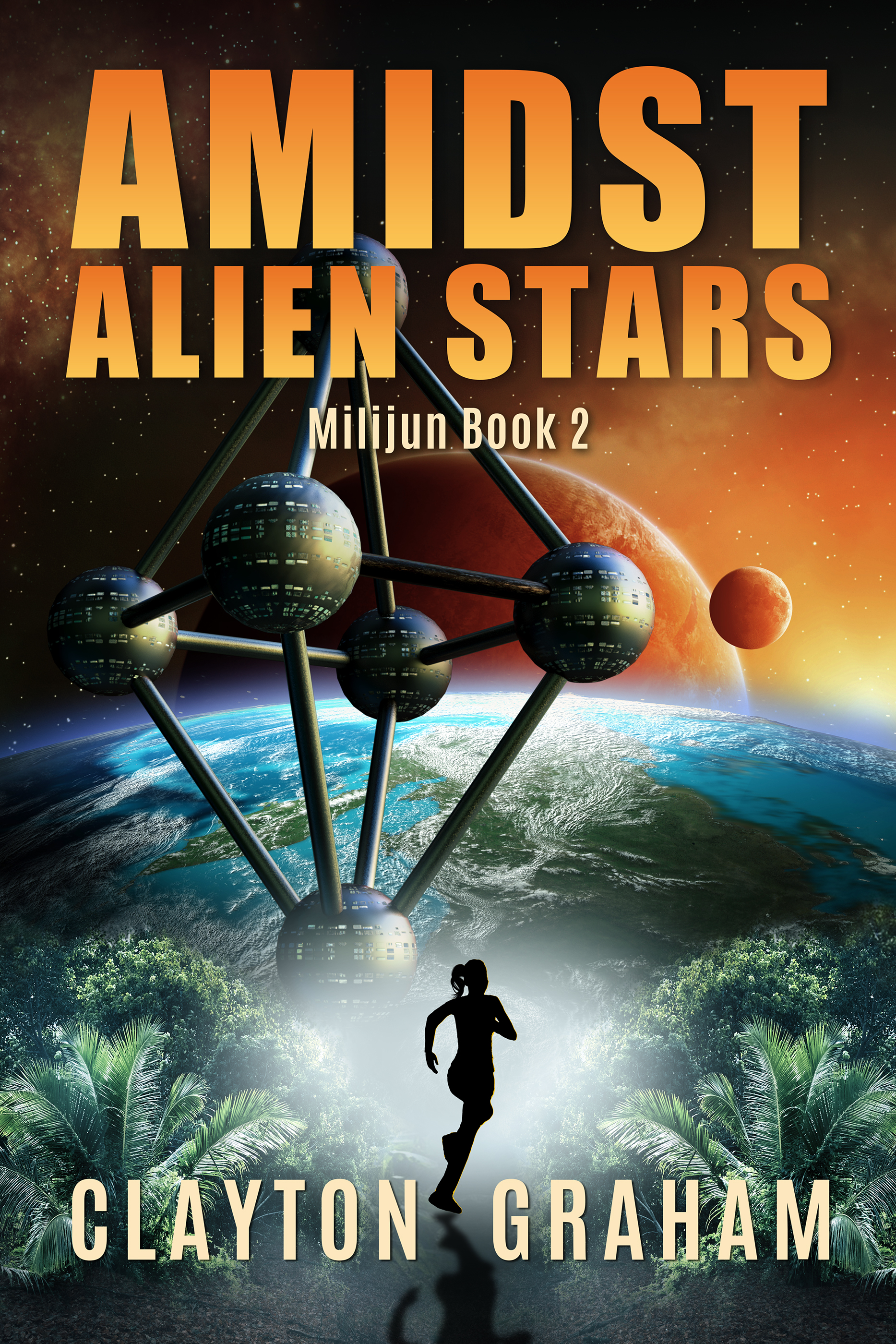