Audience with an Alien

AUDIENCE WITH AN ALIEN

It’s no secret that I am now working on a follow-up to my first novel MILIJUN, so I thought this month I would include a short extract which I have titled ‘Audience with an Alien’. I debated some time before deciding to include this in the story, but thus far it is still in! Here we go:

And now, two weeks after what Laura called their relocation, she had gained a brief audience with Rjebni. They had sat across from each other in the dining room whilst the others wandered outside under the fake sun and in the fake Earth air.

She gazed into the deep, dark eyes and asked the question. “You have proof of the afterlife?”

The alien hands whirred about their respective wrists, as was their wont. The words entered her head silently. “It is both a good thing and a bad thing. But we have proof, yes.”

“How did you find your proof?”

The hands stopped rotating for a moment, and then: “The universe is the proof. Our studies are the proof. There are many dimensions, of which we exist in but a few – and you in even fewer.”

“You grow old and you die and you enter the afterlife.”

Rjebni smiled the strange alien smile, which seemed to heighten the length of his long, pale face, his meagre lips forming a perfect circle. “We do not grow old as you grow old, we do not die as you die, but we enter the afterlife as surely as the suns move around the planets, and the planets move around the suns.”

Laura frowned. She did not understand that statement. “You do not grow old?”

“We remain the same. As we are born so we stay. It is simple.”

“You were born as I see you now? There are no children. There are no elders of your kind.” She sighed. “You remain the same.” Then she added, “But you do die.”

Strangely then, Rjebni leant across the table and grasped her hand. His eyes bored into hers, holding her as if she was cast in iron.

“You have seen the growth chambers,” Rjebni said. “Thus we are born, male and female alike. As is designated.”

“Not to the nearest time as you would measure it, but we know, yes, within reason.”

“Within reason.” Laura swallowed hard. She wanted to ask Rjebni the obvious question, but she didn’t. It would appear intrusive. The Gliezans were more alien than she thought and she wanted to know more, much more.

Rjebni released her hand and rose from the table. The audience was over.  “We are all part of the universe and its systems,” he said. “We live within its walls and we learn what we can. We live, we learn, that is our purpose. I will see you, Lady Laura.”

When he had gone, Laura remained seated and let her mind wander over untrodden ground. The growth chambers meant that Gliezans were nurtured without a childhood – at least a childhood as she knew it – and the aliens were now raising the hybrids as they would their own. It was not the Earth way. But, she wondered, is one the better of the other? Perhaps they amounted to the same thing. After all, the children in the chambers are learning, faster and more thoroughly than a child would on Earth.

And then another more cynical thought. Is it all just to make things seem more analogous to the human perspective of adolescent development; to make them feel more at home as they watched the daily progress of their part-children? Laura shook her head. There were no answers, not yet at least. Quite possibly there never would be.

She took a deep breath. So many questions. What of creation? What are their views on creation?

Great news this month with Saving Paludis picking up an International Award from Readers’ Favorite. Here it is: 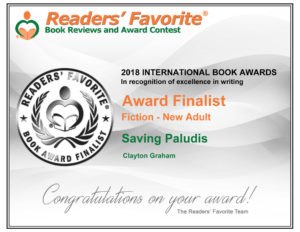 It is always nice to receive some recognition for long hours at the keyboard – I am extremely grateful. For those who haven’t looked at Saving Paludis yet, here’s a link SAVING PALUDIS.

AND A BOOK BY IAN HUGH McALLISTER FOR YOU TO HAVE A LOOK AT: 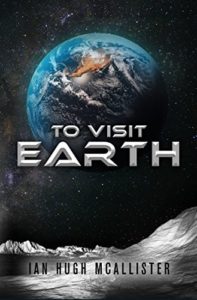 Nobody knows the destructive power of a comet better than lunar geologist Lucy Grappelli. Now her colleague is missing and she’s injured, trapped inside their crashed and dying exploration vehicle. With the commander’s unheeded words of caution still ringing in her ears, arrogance may yet prove to be her downfall.

Till next time, Graham C