The amazing senses of dogs 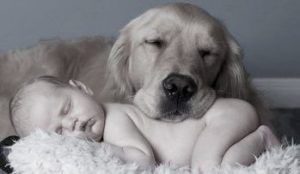 Most of us love dogs, the well-behaved ones at least, and these remarkably friendly creatures [for the most part] often seem to love us in return. But what do they see of our world, how much of it can they take in? Let’s look at the canine senses, one by one, and compare them to our own.

But before we do – check out this charming video: AS CUTE AS ANYTHING

Dogs do not see colours the way we do, but it is now believed they register a subdued version of what we see. Their vision has restrictions, which also depends on the breed. They see with less clarity than humans, especially in bright light. As far as we can tell, they cannot distinguish reds from orange, or orange from yellow. Their worldview looks like shades of yellows, blues, and grays.  The spectrum from reds to greens appear grayish to your dog.

However, dogs do excel in some conditions. They have much better night vision than humans and are better at detecting movement.

The field of vision for humans is around 180 degrees. Many dogs, in particular those with eyes on the side of their skulls, enjoy a 270 degree range – much better for hunting and tracking.

Dogs have a wonderful sense of hearing. They can pick up sounds which are too quiet for people to hear, and can register sounds that are either too high or too low in pitch for humans to sense. For example, they can hear at ultrasound range, two or more octaves higher than humans.

Dogs are also able to pinpoint just about where any noise is coming from with distinct accuracy.  If caught in a large crowd, your dog can pick up the sound of your voice and follow it to where you are. In addition, dogs can use the muscles in their ears to aim them at the source of sound, making their hearing even more efficient. Some dogs are better at this than others. They have more than 18 muscles at the base of their ears, compared to our 6 ear muscles

Puppies are born deaf with their ears sealed shut. At two weeks of age, their eyes begin to open and the ears follow shortly afterwards.  When a puppy reaches four weeks old they are hearing as well as an adult dog, and can hear about four times the distance of a human with normal hearing.

You can check out other animals’ hearing ranges here:  HEARING RANGES

Touch is a sense you would not readily associate with dogs, but for them it is extremely important. This is the first sense the dog develops. At the beginning of life their mother cleans them, touching all the nerve endings to get the blood flow pumping.

The dog’s entire body, including its paws, is covered with touch-sensitive nerve endings. The sense of touch is important to the dog because it helps it socialise with its pack-family and other dogs. That is why it’s so important to pet your dog.

In addition to whiskers, dogs have five categories of touch receptors within their skin, which allow them to discriminate between different types of touch:  Pain, Body Movement and Position, Temperature, Pressure and Chemical Stimulation.  The most sensitive places on a dog are along the spine and at the base of the tail.

To a dog, the muzzle is like our hands. It is where the dog interacts with most things.  Correction from a stern touch on the nose has been one of the most effective ways to train and get your dog to understand when they have done wrong.

Unlike the other senses, a dog’s taste is fairly poor compared to ours. We have 9,000 taste buds allowing us to decide whether or not we like something. A dog only has 2,000 and will try just about anything that you place in front of it, gulping down a meal in less than a minute.

If smell is the most important of the dog senses, then taste is the least significant.

Humans have four basic types of taste buds: sweet, salty, sour, and bitter. Salt is a very sharp taste sensation in humans. We love salty things. Dogs, though, have taste receptors that search out meats and fats.

Dogs seem to have taste buds for water found on the tips of their tongues. Most humans cannot taste water, but dogs can. People will only be able to differentiate between a high quality bottled water to poor tap water.

Dogs’ ancestors ate meat, which has a substantial salt content. To stay hydrated, a wild dog needed to take in plenty of water. The ability to taste water may have encouraged wild dogs to drink more.

The sense of smell is totally different between dogs and people. The percentage of the dog’s brain that is devoted to analyse smells is 40 times larger than that of a human. It’s been estimated that dogs can identify smells somewhere between 1,000 to 10,000 times better than humans. If you barely scrape against an object and two weeks have passed, some dogs are still able to detect your scent.

Dogs also have an organ that develops in their nose called the Vomeronasal Organ. It is present in humans but is non-functional. In dogs it detects pheromones or chemical signals from animals and people. This is how a dog can determine who is who, or even if they know the animal or human [as opposed to eyesight in humans].

Those of you who have read ‘Milijun’ will recall that Police Officer Janice Mepunga uses a pheromonal device when searching for the kidnapper of Jason Sinclair: MILIJUN

When they meet another dog, they can tell whether it is male or female, what it ate, where it has been, what it has touched, even their mood.

Humans breathe in and out through the same airway passages that lead to our lungs. Quite often if we need to smell something we sniff more than once.

A dog’s nose functions differently: nostrils move independently, helping the animal to locate the direction of the scents. Air already in the nasal passages is pushed farther into his nose so it does not compete with entering odours. The exhaled air leaves through slits on the side of his nose, and a swirl of wind created by the exhalation helps send even more scents into the dog’s nasal passages. This system enables the dog to sniff many smells at once.

According to Alexandra Horowitz, author of Inside of a Dog, dogs detect our emotions through smell.  Fear is one emotion dogs are particularly able to detect.

Studies have provided information that trained dogs can detect diabetes, seizure disorders and certain types of human cancer within 80 to 100% accuracy. With this knowledge we have created some of the greatest bonds between humans and animals. With the help of our canine friends, we have located many things, good and bad, with their amazing sense of smell.

Researchers are also now finding that oncoming bouts of narcolepsy and migraine can also be detected by dogs.

Although we may think we inhabit the same world as our dogs, we most decidedly do not. And the same goes for most animals. Humans survive in the world mainly through our eyes and our ears.  Dogs rely on their noses to make sense of their domain.

Beyond that, we live in very different places when it comes to the senses.  Dogs share our homes, our lives and often our beds, but we observe a different world to that of the dog.

Understanding what our dogs are experiencing can help us understand them better and lead to deeper bonds, improved behaviours, and rewarding training sessions.