Drones and the Future

DRONES AND THE FUTURE:

The Capabilities of drones:

We are all familiar with drones and their rather sudden surge in popularity, especially the smaller variety for all sorts of fascinating tasks. These include recreational racing, highway monitoring, disaster relief, postal services, real estate photography, traffic control, crime prevention, wildlife photography, sports photography etc., most of which have a camera on board. And, of course, much larger [and more lethal] versions are now used extensively by the military.
But what can they be used for in the middle ground? Indeed, is there any middle ground?
Some possibilities which spring to mind are search and rescue in inhospitable terrain, maritime reconnaissance, and the delivery of essentials to marooned natural disaster victims. The list is probably quite extensive. Much depends on the size of the drone. Could one be used, for example, to rescue an injured mountaineer? Is it cost effective to use a large unmanned drone in such circumstances, where a human body must somehow be lifted on board and ferried to safety? Or an injured trooper scooped up from under enemy eyes? Stretching the point a bit further – maybe the drone would have to carry some kind of robot which could lift and transfer a human body to the safety of the drone. This theme is used in my novel Milijun for the rescue of Police Sergeant Janice Mepunga in the Australian Outback.
To be used in such circumstances the drone would have to possess a hover ability, unlike many of the current military types [check out the X-47B videos at the end of this blog]. Thus, maybe a larger version of the current “four or more propeller” designs would be feasible. 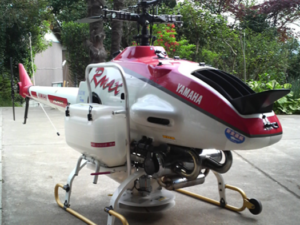 Other Uses of drones:

So what other uses could drones have? Could they eventually replace cars, carrying people to work? Can you imagine climbing into your “drone shell” and being carried off to work, along with thousands of others? And what power source would these “people carrier” drones use?
The ideas of flying surveillance cameras, robotic companions and even unmanned aircraft carrying supplies around the planet is swiftly becoming mainstream.

The first drone delivery in the United States took place recently, marking an important milestone in the development of the new technology.
Australian start-up Flirtey, in partnership with Virginia Tech and NASA, used a drone to carry 10 pounds (4.5 kilograms) of medical supplies from an airfield in Virginia to a remote clinic about a mile away over three 3-minute flights. While the demonstration was a landmark moment for drone technology and policy, it was a far cry from Amazon’s vision of a fleet of drones delivering online purchases to customers’ doorsteps within 30 minutes. The link to the Flirtey video is at the end of this blog.

The Pentagon’s dream is to put a fleet of UAVs under the control of a single operator. But this can only work if the aircraft can operate autonomously: If they can “sense and avoid” other aircraft, detect threats on their own, and work together to track targets in a coordinated way. Perhaps most importantly, the drone must be able to keep flying its mission even in “denied environments”—areas where an enemy can try to jam its communications or hack into its controls to hijack the aircraft.
http://www.popularmechanics.com/flight/drones/a13688/drone-teams-pentagon-darpa-code-17663303/

The scope for drones is boundless, but like most technology is subject to hijacking by criminals if extreme valuables are carried. So for the foreseeable future we are unlikely to see high value goods transported by drones. But how long before we have drones which are armed for self-defence? Or even police operated tracking and arresting drones to replace helicopters?
Here’s a link to an article and video on NASA’s 10 engine Drone-Copter transforming in flight:

AND Launch and land on an aircraft carrier: