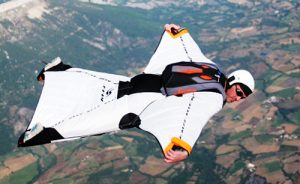 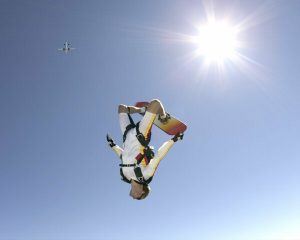 Those of you who have read the first two books in the  Milijun series will be familiar with the sentient flying robots called RNasia. This month I thought we’d put the boot on the other foot, so to speak, and check out Flying Humans. Whilst Superman is the fictional extreme of this mode of transport, the ways and means for humans to conquer the air are almost as varied as imagination will allow. This month we’ll check out three main technologies: Wingsuits, Sky Surfing and Jet Packs.

Modern wingsuits first came into play in the late 1990s, although an unsuccessful early attempt at wingsuit flying was made on 4 February 1912 by a 33-year-old tailor, Franz Reichelt, who jumped off the Eiffel Tower – a feat that ended in disaster.

A wingsuit was first used in the US in 1930 by a 19-year-old American, Rex G Finney of Los Angeles. The goal was to increase horizontal movement and maneuverability during a parachute jump.

In the mid-1990s, the modern wingsuit was developed by Patrick de Gayardon of France, adapted from the model used by John Carta. In 1997, Bulgarian Sammy Popov designed and built a wingsuit that had a larger wing between the legs and longer wings on the arms. The suits essentially create a surface area with fabric between the legs and under the arms.

A wingsuit flight ends by deploying a parachute, and so a wingsuit can be flown from any point that provides sufficient altitude for flight and parachute deployment – a skydiving drop aircraft, or base-jump exit point such as a high cliff or mountain top vantage point.

Since 2010, there have been experimental powered wingsuits, often using small jet engines strapped to the feet or a wing pack setup to allow for even greater horizontal speeds and even vertical ascent. BMW Wingsuit

There are records galore for this daring mode of flight. You can see a summary at:  Wingsuit records

And check out the guys here:  VIDEO ONE   or here: VIDEO TWO

Sky surfing is a type of skydiving and extreme sport in which the skydiver wears a custom skysurf board attached to the feet and performs surfing-style aerobatics during freefall. The boards used are generally smaller than actual surfboards, and look more like snowboards or large skateboards.

Sky surfing started in 1986. It all began with two French skydivers named Dominique Jacquet and Jean-Pascal Oron. They invented the sky surfboard and were the first to try sky surfing, a whole new style of  skydiving.

Needless to say, you must first master traditional skydiving before you strap on a surfboard!

The jumper must control the board and their body position so as to open the parachute in a stable configuration. Not an easy task! As you can see here:

This sport has become less popular these days, probably because it is so time-consuming and difficult to master.

Check the views over Europe:   VIEWS

No parachutes required for this one. A jet pack, rocket belt, or rocket pack is a device worn on the back which uses jets of gas or liquid to propel the wearer through the air. The concept has been present in science fiction for almost a century and became widespread in the 1960s.  Many of us will remember the dramatic jet pack flight at the 1984 Los Angeles Olympics.

Things have moved on since then though.

The latest Gravity Jet Suit is demonstrated in the following video for ship to ship boarding:  https://youtu.be/suHOLFhbwsM

Very impressive and much easier than climbing the rather skimpy rope ladder.

For those who want to know more about Gravity:  https://youtu.be/EAJM5L9hhBs

There is an electric version in the pipeline.

I guess we are a long way away from Superman, but a combination of a jet pack and a wingsuit might be the way to go in the future for flying humans: viz. Gliding to save fuel, Hovering [impossible in a wingsuit unless you are against wind] and Accelerating upwards and longitudinally with electrical jets. Time will tell.