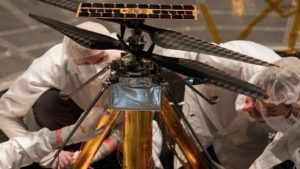 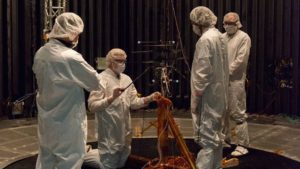 Helicopters on Mars – Dream On

When I was growing up in in the back streets of Stockport UK, I was given a present of ‘Stand by for Mars’ featuring Tom Corbett, the space cadet. This was my first introduction to Science Fiction. Well over 50 years later, the book is still going strong, albeit in modern formats. Never in my wildest dreams would I have expected that scientists would today be developing helicopters for Mars. Surely the Martian atmosphere could not support such vehicles. But read on!

The Mars Helicopter Scout is a robotic aircraft which will be used to survey the Martian terrain. It will plan the best routes for future exploratory terrain vehicles. A technology demonstrator, the craft will form the foundation on which more capable helicopters will be developed for aerial exploration of Mars, and other planetary targets with atmosphere.

The small drone helicopter will be deployed in 2021 from the Mars 2020 Rover [more about that in a future blog].  The vehicle is expected to fly around five times during its period of extraterrestrial testing. NASA will assess whether this technology demonstrator can work safely, and improve operational mapping and guidance. If successful, future mission controllers will benefit from improved travel routes planning and hazard avoidance, as well as identifying points of interest for the Rover.

Mars 2020 will launch on a United Launch Alliance (ULA) Atlas V rocket from Space Launch Complex 41 at Cape Canaveral Air Force Station in Florida. It is expected to reach Mars in February 2021.

At the end of January 2019, all the pieces making up the flight model of the Mars Helicopter were tested.

The vehicle is, needs must, very light. Weighing in at no more than 4 pounds, around 1.8 Kg, the helicopter is currently going through a rigorous verification process certifying it for the conditions of the red planet.

Ongoing testing is geared towards February 2021, when the helicopter will reach the surface of our near neighbor, slung under the belly of the Mars 2020 rover. A few months later, it will be deployed and short test flights, around 90 seconds long will begin. It will become the first human helicopter to explore the surface of another world.

The helicopter also contains built-in capabilities needed for operation at Mars, including solar cells to charge its lithium-ion batteries, and a heating mechanism to keep it warm through the cold Martian nights.

“The altitude record for a helicopter flying here on Earth is about 40,000 feet. The atmosphere of Mars is only one percent that of Earth, so when our helicopter is on the Martian surface, it’s already at the Earth equivalent of 100,000 feet up,” says Mimi Aung, Mars Helicopter project manager at JPL. “To make it fly at that low atmospheric density, we had to scrutinize everything, make it as light as possible while being as strong and as powerful as it can possibly be.”

Once the rover is on the planet’s surface, a suitable location will be found to deploy the helicopter from the vehicle and place it onto the ground. The rover then will be driven away from the helicopter to a safe distance. It will then relay commands to the helicopter. After its batteries are charged and a myriad of tests are performed, controllers on Earth will command the Mars Helicopter to take its first autonomous flight into history.

Here is a short video showing the craft on Mars: VIDEO

I can only marvel at the dexterity of this NASA team. Theirs is an enormous challenge. Obviously payloads have to be light in the Martian atmosphere for helicopters to work. Pushing those limits is a technical challenge like no other. Brilliant stuff.

“The next time we fly, we fly on Mars,” said Aung. “Watching our helicopter go through its paces in the chamber, I couldn’t help but think about the historic vehicles that have been in there in the past. The chamber hosted missions from the Ranger Moon probes to the Voyagers to Cassini, and every Mars rover ever flown. To see our helicopter in there reminded me we are on our way to making a little chunk of space history as well.”