Before we get into Space Hotels, just a quick plug for new novel Amidst Alien Stars, which is now on Pre-Order at only 99 cents until release on December 1. A chance to grab this new novel at a snip. 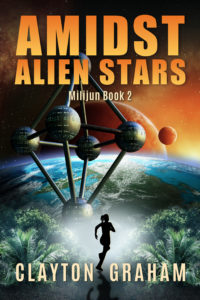 Space Hotels are in vogue. So how long before we see tourists traveling into orbit and staying at a space hotel? And I don’t mean the International Space Station – I mean a dedicated orbiting hotel with all the amenities for an enjoyable stay, but definitely no golf course. And how long will the average stay be? And how much will it cost?

Here’s a look at three of the front runners: 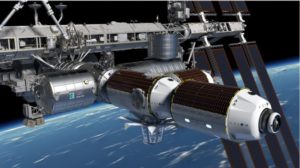 You can sign up for a 10-day mission aboard the International Space Station (ISS) — if you’ve got $55 million to spare. The $55 million covers the orbital stay, transportation to and from the ISS, and a 15-week astronaut-training program.

But the International Space Station (ISS) is currently scheduled to be retired in 2025. The Axiom Station is being built to increase access to ISS and provide continuity after its retirement. The first two modules to the ISS are scheduled in 2022. When ISS retires, Axiom’s assembled station will separate from the ISS.

Axiom Space aims to launch its first customers in 2020, company representatives have said.

The station will be a home base for professional astronauts and private explorers. It is in the microgravity laboratory where educators, scientists and researchers will conduct life-improving research.

The vision at Axiom Space is to make living and working in space commonplace as a means to sustained deep space exploration and to improve the quality of life on Earth. 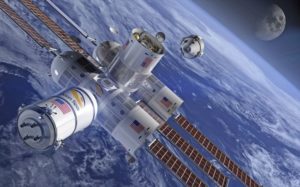 Orion Span, aims to launch its “Aurora Station” in late 2021 and begin accommodating guests in 2022, a challenging timescale.

“We are launching the first ever affordable luxury space hotel,” said Orion Span founder and CEO Frank Bunger, who unveiled the Aurora Station on April 5 2018 at the Space 2.0 Summit in San Jose, California.

Aurora Station is being built in Houston. A 12-day stay at Aurora Station will start at $9.5 million — considerably less than the $20-$40 million space tourists paid for trips to the International Space Station from 2001 to 2009.

Visitors to Aurora Station will participate in a 3-month training regimen to prepare themselves for the journey and stay in orbit. From online courses to in-person training in Houston, travelers will be prepared through Orion Span Astronaut Certification.

Orion Span expects Aurora Station to orbit Earth at an altitude of about 200 miles, a bit lower than the International Space Station at 250 miles.

While the station will be ready for guests shortly after launch, Orion Span has plans for expansion by building onto the core module. 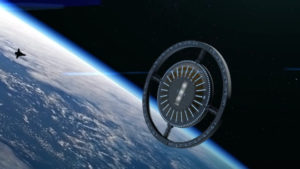 By far the most futuristic looking space hotel is the Von Braun Rotating Space Station.

The Gateway Foundation plans to build what it describes on its website as “the first spaceport.” This spaceport will orbit Earth and will accommodate not only scientific research but also tourists who wish to try living away from the surface of Earth. The Von Braun station is designed to be the largest human-made structure in space, housing up to 450 people.

Construction of the station is targeted for as early as 2025 (with the support of the space construction company Orbital Assembly) – a very ambitious timeline for such a far-reaching project.

Timothy Alatorre, the lead architect of this space station, says that the ultimate goal is to include amenities ranging from restaurants and bars to sports that would allow passengers to take full advantage of weightlessness on board the station. The station will also have programs that include the arts, with concerts on board. “We do hope, though, that people take the time to be inspired, to write music, to paint, to take part in the arts,” Alatorre says.

Gateway Foundation officials acknowledge that the station might not be entirely finished by 2025, but the group aims to develop the station’s main structure and basic functions by then. “We expect the operation to begin in 2025, the full station will be built out and completed by 2027”.

Whilst these ideas for space hotels vary in their ambition and cost, there is no doubt that the technology is already on board. The pioneer spirit is well and truly alive on Earth and such ambition, supported by scientific and engineering know-how, is quite amazing. The timescales, though, do seem rather demanding, but so much energy is being expended prepare to be surprised. The staff of space hotels would also have to be regularly rotated for health reasons.

Other countries, of course, are also looking at space tourism – a look at those in a future blog.