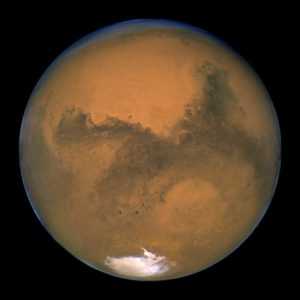 The previous blog looked at Mars and checked out NASA’s plans for getting to the red planet. This blog will look at the Martian terrain.

But before we do you might want to check out http://www.google.com/mars/

This is the Martian equivalent of Google Earth. You can search for areas just like on Google Earth. A boon for Science Fiction writers.

It’s not all that long ago that astronomers were getting excited about the canals of Mars. The telescopes of the time had found evidence of canals on the planet and the subsequent conclusions included that they were artificial aqueducts built by intelligent inhabitants. They were first described by the Italian astronomer Giovanni Schiaparelli during the opposition of 1877, and confirmed by later observers. Schiaparelli called them canali, which was translated into English as “canals”. The Irish astronomer Charles E. Burton made some of the earliest drawings of straight-line features on Mars, although his drawings did not match Schiaparelli’s. By the early 20th century, improved astronomical observations revealed the “canals” to be an optical illusion, and modern high resolution mapping of the Martian surface by spacecraft shows no such features.

About 120 years ago, however, at least one prominent astronomer, Percival Lowell, who founded the Lowell Observatory in Flagstaff, Arizona, was convinced that Mars not only supported life, but was home to an advanced civilization. Martians, the theory went, had built an extensive network of canals to draw water down from supposed icecaps at the Red Planet’s poles to irrigate a world that was drying out. Feet on ground will probably be needed to get more information on that hypothesis!

Novelists had a field day with the canal proposition. In Ray Bradbury’s The Martian Chronicles (1950), the canals are artificial waterways stretching between stone banks, filled with blue water, or sometimes poetically described as full of “green liquors” or “lavender wine”. Bradbury revisited the Martian canals in 1967 in his short story “The Lost City of Mars”.

Robert A. Heinlein gave two depictions of the Martian canals:

In The Green Hills of Earth (1947), the blind poet Rhysling, composes “The Grand Canal”, describing the beauty of Mars’ main canal as he saw it when first arriving on Mars. Having later become blind, Rhysling does not realize that human colonists have proceeded to heavily pollute the canals with industrial wastes, tear down half of the delicate beautiful structures at the canal side and convert the other half to industrial uses – with the remnant of the indigenous Martians helpless to stop them.
In Red Planet (1949), colonists use the frozen canals for travel and a seasonal migration (by iceboat during winter when the canals are frozen and by boat when the ice melts during the Martian summer). Teenagers Jim Marlowe and Frank Sutton set out to skate the thousands of miles to their homes on the frozen Martian canals when escaping the Lowell Academy boarding school.

So what do we have today?
Images revealed by NASA’s Curiosity Mars rover [using the mast camera] show stunning detail of the hills, plateaus and rock faces of the Red Planet. Likening the scenes to areas of the US desert, Curiosity Project Scientist Ashwin Vasavada, from NASA’s Jet Propulsion Laboratory in California, said: ‘Curiosity’s science team has been just thrilled to go on this road trip through a bit of the American desert Southwest on Mars.’

MOUNT SHARP with GALE CRATER in the distance. 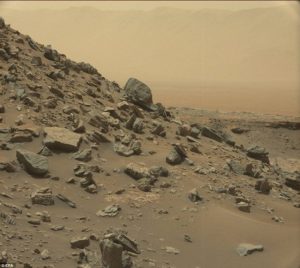 Read more: http://www.dailymail.co.uk/news/article-3783258/Red-Planet-revealed-NASA-s-stunning-pictures-Mars-Rover-hills-plateaus-rock-faces-likened-road-trip-desert.html#ixzz4dvCzNXla
The buttes and mesas were formed from eroded remnants of ancient sandstone, which originated when winds deposited sand after Mount Sharp was formed.

Curiosity, which landed near Mount Sharp back in 2012, is set to continue its mission further south and higher up the mountain.
It has already discovered evidence that ancient lakes on the Red Planet offered conditions that would have been favorable for microbes if Mars has ever hosted life.
New research seems to prove that Mars once had an ocean covering its northern areas some 3.4 billion years ago. Known as Vastitas Borealis, this land was covered by a vast body of liquid. Some say that the area was only periodically wet with lakes and smaller seas as evidenced by lack of an obvious shoreline. However, new theory suggests that the shoreline could have been obliterated by repeated tsunamis. Evidence has been found of at least two tsunami events, with waves up to 120 metres high, perhaps triggered by asteroid collisions. Left over ice, since Mars has cooled, could harbour living organisms.

The surface of Mars  is thought to be mostly basalt, covered by a fine layer of iron oxide dust that has the consistency of talcum powder. Iron oxide (rust as it is commonly called) gives the planet its characteristic red hue.

In the ancient past of the planet, volcanoes were able to erupt for millions of years unabated. A single hot spot could dump molten rock on the surface for millenia because Mars lacks plate tectonics. The lack of tectonics means that the same rupture in the surface stayed open until there was no more pressure to force magma to the surface. Olympus Mons formed in this manner and is the largest mountain in the Solar System. It is three time taller than Mt. Everest. These runaway volcanic actions could also partially explain the deepest valley in the Solar System. Valles Marineris is thought to be the result of a collapse of the material between two hotspots and is also on Mars. So it seems Mars has the highest and the lowest terrain in the universe.

Just seven weeks after Curiosity touched down, mission scientists announced that the rover had found an ancient stream bed where water once flowed roughly knee-deep for thousands of years at a time.

Also, Curiosity spotted some of the key chemical ingredients for life in the gray powder it drilled out of the John Klein rock, including sulfur, nitrogen, hydrogen, oxygen, phosphorus and carbon. The fine-grained rock also contains clay minerals, suggesting a long-ago aqueous environment — perhaps a lake — that was neutral in pH and not too salty, researchers said.

There can be no doubt that the martian terrain will be full of mysteries as we gradually learn more.