Merry Christmas and a Happy 2021 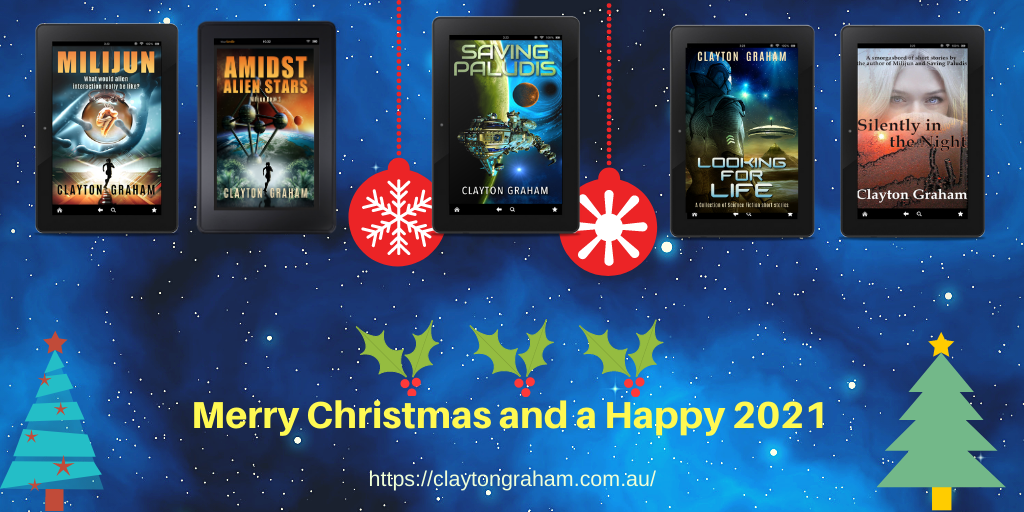 Merry Christmas to all readers and writers and a Peaceful and Healthy 2021.

Season’s Greetings to all. Have a lovely Christmas and a Great New Year. And let’s see the back of this wretched virus.

There’s no denying that 2020 has been a terrible year for the world, but now is the time to look forward to a better 2021.

For those who haven’t read Him at Number Three, here is the link to read this macabre tale when you can find a few quiet moments to yourself: Him at number three

And a reminder, if you have not done so already, you can get Silently in the Night for free, simply by subscribing to my monthly newsletter at the bottom of the page at: https://claytongraham.com.au/

You can, of course, unsubscribe at any time.

And here’s a small excerpt from latest book ‘Looking for Life’. This short story collection has received great reviews and would make a marvelous present for a loved one who loves Sci-Fi, or would like to be introduced to it:

EXCERPT FROM LOOKING FOR LIFE

There was a bell ringing. Fantom slowly opened his eyes. A voice echoed around the cabin.

He glanced at the console screen. Numbers were scrolling, too quick even for his new eyes.

His awakening mind recalled the section in the manual on landing procedure. He pressed button one nine and immediately sensed a drift over to the centre of the floor. There was a click, and he found himself held from beneath, almost as if he were a prisoner anchored to the cobbled flags of a medieval prison cell.

Imminent indeed! Fantom recalled similar landings back in the solar system, where he had been supported within the arms of a comfortable G-couch. This time he felt as if his mind was held in a block of ice. But it still held thought. At the end of the ship’s manual, there had been a bit of history; he was familiar with most of it, but by no means all.

Ages ago, when scientists first evolved the idea of the Looking For Life spacecraft and its ground-breaking occupant, there had been much bitter argument centred on the design of the life-detector. After all, life could be detected in many ways: respiration, conversion of energy, reproduction, bio signatures, to name but a few. However, it was the old school that emerged the victors, the school that had wanted real life. And that required major translation—the ability to move from one place to another based on reasoning and thought and, of course, the means to do it. And maybe also the sign of dwellings—intelligently created habitats. Naturally, that meant that planets supporting some kind of bacterial or basic plant life would be bypassed. But the main purpose of LFL was to find animal life—animal life that seemingly moved at random over periods of time.

Fantom saw clouds on the screen. And then they were through them, and he noticed a cloud of dust pirouetting against a blue-green sky. A tornado! The craft banked away, and a rocky plateau bathed in light by a faraway sun came into view, mountains in the distance seeming impossibly high. Then what may have been an ocean, glinting in the sunlight, with rolling waves but no sign of life upon its surface.

Fantom was trying to absorb all that information when the floor suddenly shook and the lights flickered. Then everything became still as the roar of the engines died. He glanced at the screen. It depicted what he presumed was the immediate external view: a brown rocky surface spreading to distant hills turned purple by the setting sun. To the right there was a stand of what looked like trees—life, in other words. If I had a heart, Fantom thought, it would be beating madly.

Take care over this special time of year, and have a wonderful Christmas. Graham C.