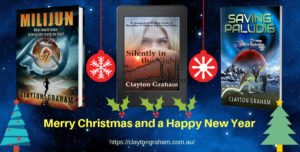 First and foremost Merry Christmas to all readers and writers and a Peaceful and Healthy New Year.

Seasons Greetings to all. Not really a blog this month but a small gift of the Prologue from the sequel to MILIJUN, which will be ready for release next year – title to be decided. The prologue describes Laura Sinclair’s feelings as she tries to come to terms with where she is and what she has to do in the future. I hope you enjoy. 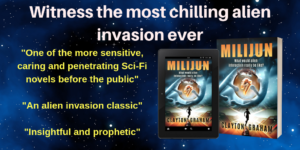 As Laura passed the communal mirror, she noted that she’d gained very little weight since being on the Gliezan station. It was all the walking, she surmised, even if it was around in circles; in the outside which is not really an outside. She didn’t really know why the aliens had provided a mirror, perhaps to remind them they were human, amidst this most alien of places.

She kept her blonde hair short, wore minimal make-up, ate the Earth-style food provided, and conversed civilly with the other women; the mothers of her son’s mystical hybrid children. She did, she mused, still possess the elfin features which had been a subject of derision for police woman Janice Mepunga back on Earth.  Even her nano-engineered complexion was still in evidence, setting her blue eyes off to perfection. That’s the problem, Laura thought, nothing is changing. Their captors had revealed no further details of their plans, the humans were apparently in limbo, awaiting the next phase, whatever that may be. And, no doubt, awaiting the birth of the hybrids.

The other women had been relieved of their nurturing burden, which she thought was a good thing. She knew they were all happy with the situation, none of them had wanted to carry to a full term, not wanted to give birth to a human-Gliezan child. The hybrids were now in chambers, thriving according to the Gliezans, growing fast, very fast!

Their hosts were as mysterious and enigmatic as ever, and generally kind, serving their needs with remarkable insight into Earth’s ecology and human requirements. They had just not mentioned returning to Earth yet. That was her single-minded purpose now, the main purpose of them all – to return to Earth, to do what they had to do, or preferably do nothing at all. Problem was, they had no control over any of it.

The events around Milijun, that unknown time ago, had been an interlude in her life which had changed her from an embattled single mother to a person of strength and character. Along with Jason, her teenage son, she had been experimented upon and played by both aliens and humans alike. And she had reacted accordingly, if on occasions selfishly, in order to protect that which she held dearest, still held dearest for that matter.

The world they had been snatched from, the Earth of their past, had not been perfect. Indeed, it was mostly imperfect. It had been recovering from war and disease, still trying to mend the rifts of insanity and stupidity and lack of communication, which had plagued the planet for centuries. But it was their world! Like all the humans on this station, Laura wanted to return.

Yet again, Janice Mepunga suddenly skipped into her mind. She had often done so recently. Janice, she hoped and presumed, would carry her child to a normal birth. The police woman, mind in turmoil, had wandered off with the intent of returning to her indigenous roots. Heaven knows what had become of her. How had she been received? And how would Janice present a hybrid child to her people – a people who held their ancestors in such high spiritual regard? It is unlikely, Laura thought sadly, that I will ever know.

Reluctantly, Laura returned to one of her more frightening thoughts: would the aliens return to Earth and collect Janice’s child, bring it back to the station to join the others? Perhaps they had done so already! Jesus aid her! I hate not being in control.

Milijun and its personnel, with the blessed exception of Nomi, had been destroyed. Major General Sebastian Ord was dead, as was Uriel, the research leader. But Simon Cordell, the lunar miner, remained, was with them on this station orbiting the Gliezan home planet. That’s another assumption, that they are circling the home planet of the aliens.

Not that they knew where the Gliezan world was, of course. Five light years from Earth? Five hundred? Five thousand?

She closed her eyes and the mirror vanished. How was this going to work out? How could they possibly survive? In the outside which is not really an outside.

and subscribe to my monthly newsletter here for a free copy of ‘Silently in the Night’ and other great offers. I will never spam you.

Keep Safe and see you in the New Year.