Laura and Jason Sinclair live in a world very different to our own. Even those of you who know little about Australia in 2016 will know it is geographically a united country, certainly not split into two separate countries as in Milijun [think Germany after World War 2]. In 2179 past wars have decimated the cities and the ecologies of the planet. The last conflict was decades ago but humankind is struggling to find its feet. International communications are average, international cooperation subject to distrust. It is, perhaps, easier to escape. There is no GPS, very few satellites remain in orbit, cities and populations are rebuilding.

So … Laura and Jason are escaping. They are on vacation. They are heading west. Laura is five years divorced, but still dreams and thinks of Dek frequently. And she is as uncertain of the future for herself and her son as she has ever been. She also has a hidden secret, but has not yet told Jason. Encountering aliens does not make that future clearer. In fact it almost scrambles Laura’s mind.

Sons are the anchors of a mother’s life – [Sophocles] 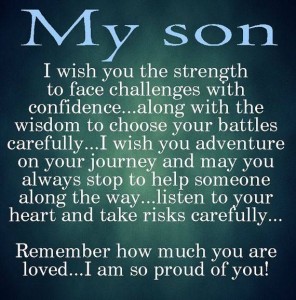 For Milijun’s Laura and Jason Sinclair

According to many social commentators, teenage boys who are close to their mothers are less likely to engage in risky behaviour. Negative peer pressure is itself negated by close communication between mother and son. Research suggests that a boy’s mother is very influential in a boy’s decision making. No one can argue with that. It would seem to be self-evident.

In Milijun, however, Jason has to choose between keeping close to his mother or ‘going out on a limb’. There are other pressures which he has to deal with. He feels the weight of the human race upon his shoulders. He is apparently the only catalyst for communication between Earth and the alien presence. He has a responsibility which most would fear.

Jason does, however, have a teenager’s thirst for knowledge, a teenager’s appetite for excitement. He also knows the truth when he sees it.

Taking an excerpt from Milijun:

Jason realised that the ‘you’ the alien referred to was the entire human race and immediately felt the burden of emblematic responsibility, as if the whole future of Earth was in his hands.

Laura runs from; Jason runs to. But somehow they meet in the middle, as mothers and sons usually do. They are lucky in some respects that their love for each other never fades. It is that love which spurs Laura into acts she would never have undertaken in her ‘old life’. She encounters the aliens; in many respects Jason embraces them.