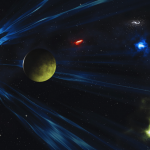 It’s nice to know that science is contemplating life on other worlds—and not that far away at that. Even if currently there is no conclusive evidence and some uncertainty about the methodology of detection.

Gliese 581g, unofficially known as Zarmina, is an unconfirmed (and frequently disputed) exoplanet claimed to orbit within the Gliese 581 system, twenty light-years from Earth. The planet still remains unconfirmed as consensus for its existence cannot be reached.

It was discovered by the Lick–Carnegie Exoplanet Survey in 2010, and appears to be the sixth planet orbiting the Red Dwarf  star, Gliese.

This particular star has six planets discovered to date, orbiting in nearly circular paths. And it is the latest discovery that is causing some excitement. The planet named Gliese 581g appears to be orbiting in the ‘habitable’ zone, and is only three to four times as massive as Earth.

First announced in 2010 as a planet close to Earth’s mass in the habitable zone of its host star, the exoplanet has come under scrutiny as other research teams cast doubts on its discovery.

In 2010 scientists were very excited about the detection of Gliese 581g. Reference: NEW PLANET

“Personally, given the ubiquity and propensity of life to flourish wherever it can, I would say, my own personal feeling is that the chances of life on this planet are 100 percent,” said Steven Vogt, a professor of astronomy and astrophysics at the University of California, Santa Cruz. “I have almost no doubt about it.”

His colleague, Paul Butler of the Carnegie Institution of Washington, in Washington, D.C., wasn’t willing to put a number on the odds of life, though he admitted he’s optimistic.

Several studies have disputed the planets’ existence, based on different methods of analyzing the signals and ways of trying to sharpen them up. For example we have: DOUBT.

Another, by a Swiss team using additional data, prompted the scientists who discovered Gliese 581g, Steve Vogt of the University of California Santa Cruz and Paul Butler of the Carnegie Institution for Science in Washington, D.C., to publish a new paper in 2012 criticizing the Swiss team’s analysis and reaffirming the existence of Gliese 581g with their own analysis.

Robertson said that in his case, he and his colleagues were not trying to disprove the existence of Gliese 581g, but to find a way to sharpen up small signals from planets and make them more visible by correcting for the activity of the star, which can also cause small shifts in the colour of a star’s light.

All this illustrates how hard it is to gather solid evidence in the vast universe we inhabit. I salute all scientists and researchers in this field, and do not expect them to agree on everything – that is expecting the impossible. After all, our own existence is a miracle in itself, and has by no means been explained!

However, the alignment of NASA’s James Webb Space Telescope has begun—so watch this space!   https://www.space.com/james-webb-space-telescope-alignment-begins