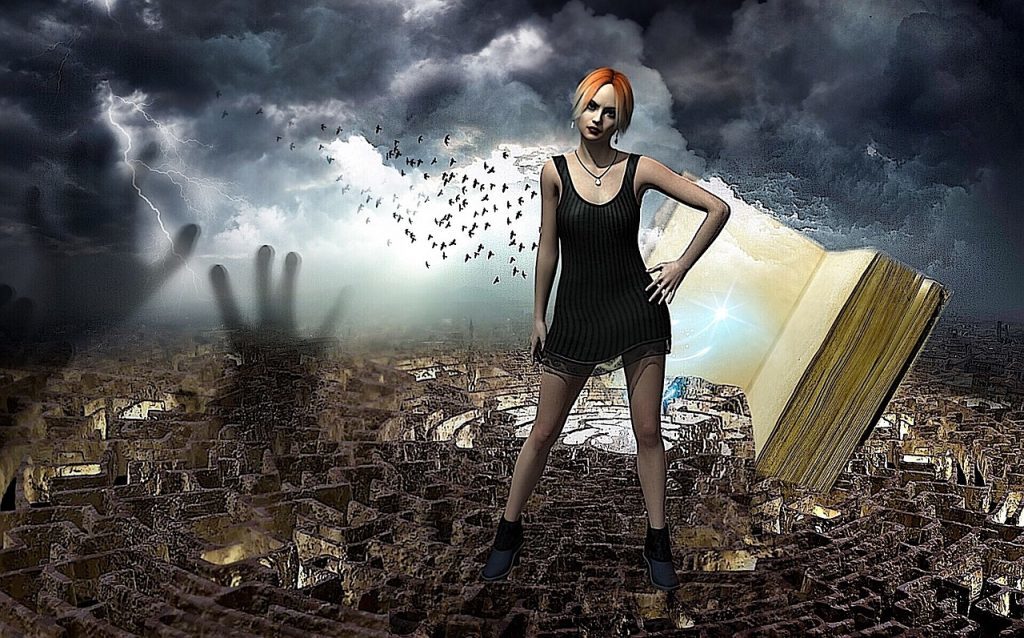 Eucla was a shell, desolate and haunted, harbouring memories of events that were still beyond Laura Sinclair’s comprehension.

She stood at the entrance to the old military base, taking shelter from the heat of the sun beneath the protection of the high walls. There were no guards, no scanning machinery, nothing that could be described as militaristic at all. In fact, if she so desired, she could walk straight in through the open gates, cross the forecourt, and enter the decrepit buildings—buildings where mysterious happenings had unfolded all those years ago.

It was nothing like the base she had known, the base commanded with an iron fist by Major General Sebastian Ord, who had died a sudden death at Milijun as the alien robot he had carried abruptly vacated his body’s interdimensional space.

Laura was not surprised at the devastation, but regretted it all the same, for the Eucla base held vibrant reflections of a changing world. If there were such things, the ghosts of sacrificed women would be frequenting the rooms within. It had all been over one hundred years ago! A lot had happened since then: the abduction to Glieze; the return of the hybrids to the joint Terran-Gliezan base on Mars; the ageing of her son, Jason, from a teenager to a man.

And during that time I have hardly aged at all!

She had returned to Earth to help collect her thoughts, to ground herself, to regain her normal emotional state after the intergalactic Gliezan interlude. This despite Jason’s warning that the home planet was in dire straits, or, as the female hybrid Relna had phrased it in her clipped alien accent, it was in retrogression. What did that mean anyway? On the way to oblivion? Marked for human extinction?

She wanted to see, wanted to tread familiar territory—and sooner rather than later, she wanted to visit the home where she and her husband, Dek, had raised Jason. Or at least what was left of it—what parody now stood in its stead over one hundred years later. And she was not afraid to admit that she longed to view the place where Jason had once been an energetic and lovable teenager.

As soon as her feet had touched the soil of Earth again, recollections of her pre-abduction days had come flooding back. Not only the incidents at Milijun and Eucla, but her life prior to all that devastation; her normal life. The marriage to Dek—who was now well and truly gone—the amazing birth of Jason, their family adventures together, many of them on the water, and then the slow crumbling of marital love under the pressures of daily existence and the fight for survival in a world that still showed the scars of war.

They had been separated for five years prior to her abduction. Throughout that time, they had communicated occasionally, sharing polite but not effusive remembrances of happier days, as if neither of them would admit to any remnant feelings for the other. Stupid, she had thought at the time, still did for that matter. They were both stubborn, strong-willed by nature, and her vacation with Jason across the vast Nullarbor had been her attempt to celebrate some kind of freedom. How ironic was that?

But now she wanted to know what had happened to Dek. Had he met someone else? Had more children? She wanted to know how he had lived and died during her sojourn in space. And she had to start here—where it all began, where she had rescued some of the women who were carrying the human-alien hybrids.

They had escaped, only to go from the frying pan into the fire. The mothership had come and spirited them away to the Gliezan space station, untold light years distant and so alien it had distorted their hold on reality and on the fabric of time itself.

But at least they were back, she thought. If not on Earth, at least close by on Mars. And the aliens were with them, not just their abductors, the Rbuzen, but also their ancient enemy on Glieze, the Gerb. And it had been Jason who had brokered the unlikely peace between the alien factions, and it was he who now commanded the joint Martian base.

The Martian settlement had been championed and founded by Nomi, Major General Sebastian Ord’s mole at the outback research station called Milijun. Nomi had since gone on to become Colonel Norma Millison. At the time of Milijun, she had been young, eager, and headstrong—and escaped from the research base with all its secrets on file, including the alien ones!

Millison, the base on Mars named after Nomi, currently held over two hundred personnel, consisting of humans, Rbuzen, and Gerb—who were essentially ancient Rbuzen, she reminded herself—and the extraordinary hybrids, all ably supported by plentiful RNasia and a few nagib, cybernetic alien robots that possessed amazing powers. The Martian enclave appeared to have only one purpose: the exploration of the universe and its physical and interdimensional components. For, as Rjebnigerssel, their alien mentor on Glieze, had once pointed out to Jason: why else were they in the universe at all?

But none of that was for her. She had finished being played by both humans and aliens alike. She had finished with travelling through interstellar space and time. That, she thought ruefully, she would leave to Jason, the Rbuzen First Seen.

Laura took a deep breath and walked through the huge gates.

There were two wrecked vehicles in the yard, not military but large hydrogen-powered utility wagons, the sand-covered gravel beneath their distorted spongelike wheels betraying no sign of footprints. In fact, the surrounding terrain seemed undisturbed no matter where she cast her gaze. Nobody had been here for a long time. Or maybe the wind had shifted the evidence, blown it away in an attempt to confuse the unwary trespasser.

There was nothing in the vehicles except the faint smell of urine and sun-blistered upholstery. Everything inside the wagons was faded, as if occupying dimensions half-removed from the ones she occupied. Someone, someone desperate, had probably lived in the cars for a while.

As she crossed the open area on approach to the main building’s door, Laura recalled events that had taken place here more than a century ago: her search for Major General Ord’s office accompanied by the insectlike bionic microaerial vehicle; the control room where, assisted by Uriel’s cloaking device, she had threatened violence upon the military personnel; the cells where the women had been held prisoner; the congregation of Special Forces personnel that had started the entire chronicle.

Laura traversed the yard, pausing only at the entrance to the main building, a little hesitant to go beyond the open threshold. She wondered how long the base had remained functional after the events at Milijun, and whether it would tell her anything of the countless years since her rapid departure from the planet.

She took a step and stood beneath the portal, encircled by the huge door frames; the doors were long gone, perhaps stolen for firewood or simply ravaged by time. She swivelled, casting her eyes back along her entry trail. There, stood between the enclosure’s great gates, was her nagib escort: a robotic servant of the Rkem, those otherworldly beings who had seemed to rule the roost on Glieze. It would wait faithfully for her to return, at least for a good while yet.

And nearby, the saucer would be hidden in dimensions beyond her ken.