Hi everyone. If anyone missed it there is a separate guest blog dated October 25 by J L Stowers, who talks about her new Sci-Fi book The Cost of Survival.

Here we go on Reverse Evolution:

Reverse Evolution – what is it?

If we have evolution, then is there such a thing as reverse evolution or biological devolution? Backward, regressive or reverse evolution is the notion that species can revert to supposedly more ‘primitive’ forms over time. The critical word here is ‘supposedly’. If it is advantageous to lose an appendage or a faculty in order to operate in a severely changed environment, then moving backwards may be the wise thing to do. The forces at play are marvelous to behold but impossible to fully understand.

Ever since Charles Darwin proposed his theory of evolution in 1859, scientists have wondered whether evolutionary adaptations can be reversed. It’s an easy question but a hard answer.

Jeff Gore, assistant professor of physics at MIT, says, “The critical question to ask is not whether evolution is reversible, but under what circumstances it could be. It’s known that evolution can be irreversible. And we know that it’s possible to reverse evolution in some cases. So what you really want to know is: What fraction of the time is evolution reversible?”

Gore also says. “For example, with the superfluous human appendix [a healthy one], it may just be that the effects associated with removal are [we believe] very small, in which case there’s no selective pressure to get rid of it.” 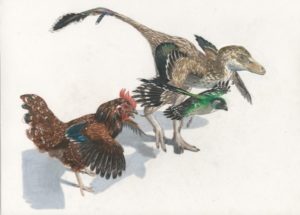 A limited number of creatures appear to have been shaped by regressive evolution. Look into the face of a hagfish—an eel-shaped marine animal—and the hagfish won’t look back. The creatures are almost blind, finding their way around the seafloor primarily using their sense of smell and touch.

Now, in a shock to biologists, research on a 300-million-year-old hagfish fossil reveals that the animals once had working eyes—but evolution took them away. Whatever for?  Incidentally, the hagfish (see picture) is the only known animal with a skull but no backbone, and is now completely blind. However, the hagfish is thought to be in the process of evolving sight yet again. A strange cycle, presumably dictated by surroundings.

And that’s where I am in a quandary about evolution. Why should an entity change if it is happy as it is, and how does the hagfish know about sight if it doesn’t possess it? Surely environmental change alone cannot explain the diversity we have on this planet. Perhaps there is some other force involved, which we are as yet unable to explain. Does increased light beget eyes, even if the creature cannot recognise the light?

Modern penguins retain signatures of their airborne relatives, including wing bones, a pointy keeled breastbone for wing muscle attachments, and feathers. Losing flight made penguins better suited to their environment, because it meant that the birds could get bigger. Flightless penguins evolved bigger muscles to better power through the water, denser bones that added strength and reduced buoyancy, and shorter, stiffer wings for more powerful swimming strokes with less drag. That makes more sense. But flying birds appear to have an easier existence than the poor penguin, which can really struggle on land. Not sure why they really moved away from flight!

Carp and Scales: Evolution can be quick when it needs to be. Medieval European monks selectively bred carp centuries ago to produce ones with fewer scales, thus making them easier to gut and cook. Starting in 1912, the “mirror carp”— named for their smooth sides—were introduced to Madagascar, where no carp existed, for fish farming. They quickly spread throughout the island. However, by the late 1950s, people observed the mirror carp’s descendants “degenerating” into more scaled fish. 65% of the wild carp, descended from the original mirror carp released into the wild, were fully scaled, despite all still carrying the genetic mutation that originally turned their ancestors into mirror carp. This all happened in a mere 100 years, or 40 carp generations. here’s the link:

Researchers are looking at how the rate of environmental change affects the reversibility of evolution. In one study, they assumed an immediate switch between two environments, but they believe that more gradual changes might alter the rate of reversal. This begs the question – how swift can backward evolution be? The carp example in the preceding paragraphs suggests it can be quite swift.

Summary and links for further reading

If the environment changes rapidly [ eg. the dinosaurs] I believe only a few living creatures will survive it. But how do we define rapidly? Climate change action skeptics [and even some of those who believe in it] are continuously saying the human race will adapt. But they do not mean the human body will adapt! The mathematics of change, and botanical reaction to it, are purely in the hands of nature – it is far too complex for humans to completely understand. And modifying [adapting] our lifestyles to survive will be extremely costly.