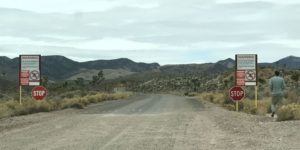 It seems that there will always be controversy surrounding Area 51, but just where is this American base, and what is its purpose?

The base is located in the Nevada Test and Training Range, an Air Force base about 150 miles from Las Vegas. It has been the subject of rumors regarding aliens since the 1950s, when people reported seeing UFOs at the location. In 2013, the CIA declassified documents related to Area 51, thereby at least recognizing its existence.  Some believe that the government studies time travel at Area 51, also known as Groom Lake or Dreamland.

Worth noting is the presence nearby of Nellis Air Force Base, where Stealth bombers and reconnaissance planes have been developed.

What could be happening there?

There is no doubt that Area 51 is a top secret base, where experimentation and research are undertaken. But does this really involve study of actual alien beings? Extremely unlikely, in my opinion. If it does, there can’t be many there, and after 70 years it would be difficult to keep that particular secret under wraps, considering several rotas of scientists would have been involved.

The base could, however, be undertaking studies into new aircraft/spacecraft technologies based on the apparent sightings of UFOs and their modus operandi. It would be the obvious thing to do if the USA government took a ‘what if?’ approach.

In July 2019, what started out as a simple Facebook post, a tongue in cheek joke about storming Area 51, has grown into a huge national event which will either go off with a bang or a whimper on September 20, probably the latter.

The “Storm Area 51” Facebook post grew monumentally as people pledged to crash the secret military base in an attempt to “find aliens or proof thereof”. It has grown in scale in recent weeks. More than 2 million users have now said they are going, with over 1.4 million replying they were interested [which means nothing at all]. Officials have, however, given the final permits to a pair of festivals that may draw thousands to the area, no doubt hopeful they will divert people away from Area 51. I believe the Facebook post may now have been taken down.

“If you plan on attending the event you must be experienced in camping, hiking and surviving in a harsh desert environment and have a vehicle in good shape,” the website reads. “You must be prepared to be completely on your own for food, water, gas, etc. We expect cell service and the internet in Rachel [a nearby town] to be offline. Credit card processing will not work, so bring enough cash.”

You can check out the possibility of alien contact [at least in our physical domain] on a previous blog: CONTACT PROBABILITY

And for those who want to know more on Area 51, here are a few links:

Hopefully all things will pass safely.

We’ll see what happens on September 20, but my money is on a damp squib, with the aliens having the last laugh.