Hi everyone. This month’s blog is very down to Earth, literally and geographically. It looks at Tasmania, the triangular island off the south coast of Australia and checks out some of the Tasmanian wildlife. There is also a Guest  Author blog by Chris Turner.

First of all though, you can check out exciting new release, Saving Paludis, by clicking on the image directly below. For those who have already picked up the novel, an honest review would be very much appreciated. For those of you who have not yet got a copy, it is on sale at: 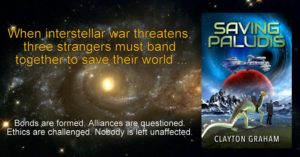 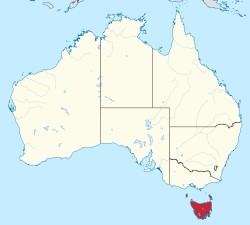 When people think of Australia, they rarely think about the island which is set adrift at the foot of the large continent [shown in red on the map above]. David Attenborough has recently made a documentary on the wildlife and wilderness of this rather beautiful island, and even as a long term resident of Australia it opened my eyes to quite a  few new things. So I thought I would dedicate this blog to Tasmania, the Apple Isle and more particularly its wildlife.

Tasmania sits to the south of the continent of Australia as shown on the map in red. It is located 240 km (150 mi) to the south of the Australian mainland. The state encompasses the main island of Tasmania, and its many surrounding islands. It is the 26th largest island in the world. The state has a population of just over half a million, just over forty percent of which reside in the Greater Hobart precinct in the south-east.

Tasmania’s area is 68,401 km2 (26,410 sq mi). Promoted as a natural state, protected areas of Tasmania cover about 42% of the land area of the state, which includes National Park World Heritage Sites. About 2,500 km south of Tasmania lies Antarctica, which is nearer than areas on the northern Australian mainland.

The Tasmanian Wilderness is one of the largest conservation reserves in Australia. At approximately 1.6 million hectares it is one of the three largest temperate wilderness areas remaining in the Southern Hemisphere.

The region is home to some of the deepest and longest caves in Australia. It is also renowned for its diversity of flora. Some of the longest lived trees and tallest flowering plants in the world grow in the area. The Tasmanian wilderness is a stronghold for several animals that are either extinct or threatened on mainland Australia. 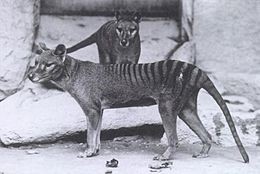 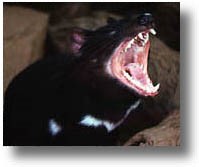 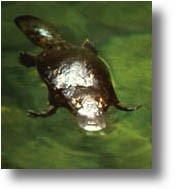 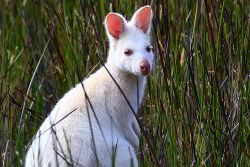 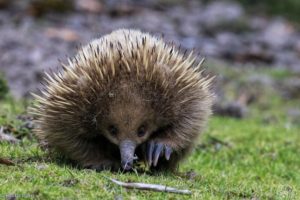 It is impossible to talk about Tasmanian wildlife without mentioning the Tasmanian Tiger or thylacine. Though now considered extinct there are those who claim to have seen it wandering in the south-west wilderness areas in recent times.  The thylacine was an apex predator, like the tigers and wolves of the Northern Hemisphere from which it obtained two of its common names. As a marsupial, it was not closely related to these mammals, but because of convergent adaptation  it displayed the same general form and biological trends. Its closest living relative is thought to be either the Tasmanian Devil or the numbat.

The Tasmanian devil (Sarcophilus harrisii) got its name from early European settlers who upon hearing mysterious unearthly screams, coughs and growls from the bush decided to investigate further. Finding the dog-like animal with red ears, wide jaws and big sharp teeth led them to call it “The Devil”.

Have a listen: Tassie Devil

In late 2008, the Tasmanian devil was also up-listed to ‘Endangered’ on the Red List of the International Union for the Conservation of Nature and Natural Resources (IUCN) – widely considered the most authoritative system for classifying species in terms of their risk of extinction.

An adult platypus is usually from 45 cm to 60 cm in length, with females generally smaller than males. Average platypus size increases with latitude, with the platypuses in north Queensland generally being the smallest where males average about 1 kg. Tasmanian platypus are relatively huge, with some adult males weighing up to 3 kg.

The monotremes have lower body temperatures than other mammals and have legs which extend out, then vertically below them, resulting in a gait that resembles a reptilian waddle rather than a straight-line gait. These features, together with their egg-laying, are more like that of a lizard than a mammal.

White wallabies are Bennett’s wallabies (Macropus rufogriseus) with a rare genetic mutation that gives them their white fur. Bruny Island, on Tasmania, has a population of white wallabies, some of which are albino with white coats and pink eyes, ears and nose, while others possess only the white coat.

Tasmanian echidnas are more furry than their northern counterparts due to the colder Tasmanian climate. They avoid hot weather as they cannot sweat, and hibernate during winter.

Tasmania is a place blessed by unspoiled natural beauty, from craggy mountains to sensational coastal scenery. Owing to its relative isolation Tasmanian wildlife retains characteristics somewhat different to the Australian main continent. Well worth a visit, if you have a trip to Australia in mind.

The Dim Zone by Chris Turner 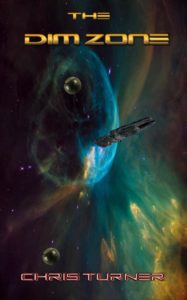 How far is too far?

Mercenary Yul Vrean is hired by billionaire CEO Mathias of Cybercore to bring back alien samples from a remote planet in the Dim Zone. It’s a region rife with murderous space pirates and slavers, the warlike Zikri and Mentera.

This alien technothriller is full of deadly space battles, extreme action, bio-mechanical fusion, killer aliens, a touch of the bizarre and fantastic… it will certainly intrigue fans of Alien, Predator and The Matrix.

In a race for mechnobot technology, genius Sigmund Hresh has engineered a prototype for what may be the holy grail of AI. The uses of such technology vary from the sinister to the saintly. Yul and his space thugs may be the only link preventing the next galactic war and saving the human colonies from hostile aliens.

The Making of The Dim Zone…

The booktrack audio component was based on many space classics with similar textures to Alien Covenant and Life. I created composite alien effects from mixes of digital samples and animals, using pitch effects and warping. All in all, an eerie backdrop to the alien planet Xeses, and later, the corridors inside the starship Orb of the Zikri hunters.

Enjoy The Dim Zone, the next book in The Timelost series: