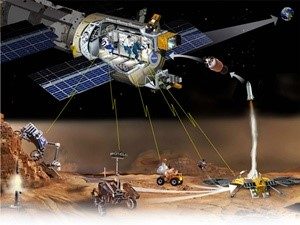 The ability to move instantaneously from one location to another without physically occupying the space in between.

The scientists in Sci Fi thriller ‘Milijun’ have developed the means of teleportation over short distances, a technology which Laura Sinclair is able to use to some effect in the story. This begs the question – when will humans be able to teleport objects through space?

Already, I hear your skepticism [and I don’t blame you!], but believe it or not some extensive work is going on in this area. I will admit that I know very little about the science behind the subject, but I find what is already in the public arena fascinating. I have tried to keep the technical jargon to a minimum, whilst giving an overview of scientific directions.

Teleportation goes by many other names, a few of which are listed below:

Quantum teleportation is a process by which quantum information (e.g. the exact state of an atom or photon) can be transmitted (exactly, in principle) from one location to another, with the help of classical communication and previously shared quantum entanglement between the sending and receiving location.

Although the name is inspired by the ‘teleportation’ commonly used in fiction, there is no relationship outside the name, because quantum teleportation concerns only the transfer of information. Quantum teleportation is not a form of transportation, but of communication; it provides a way of transporting a qubit [ quantum bit – a unit of quantum information] from one location to another, without having to move a physical particle along with it.

Physicists at the California Institute of Technology first teleported a single photon back in 1998 a mere three feet.

Since then, distances have increased, but this is still working largely with photons.

More recently researchers in China have apparently teleported a photon from the ground to a satellite orbiting more than 500 kilometers above the Earth: [Emerging Technology from the arXiv July 10, 2017]: Link

Last year, a Long March 2D rocket took off from the Jiuquan Satellite Launch Centre in the Gobi Desert carrying a satellite called Micius, named after an ancient Chinese philosopher who died in 391 B.C. The rocket placed Micius in a Sun-synchronous orbit so that it passes over the same point on Earth at the same time each day.

Micius is a highly sensitive photon receiver that can detect the quantum states of single photons fired from the ground. That’s important because it should allow scientists to test the technological building blocks for various quantum feats such as entanglement, cryptography, and teleportation.

The Micius team have announced the results of its first experiments. The team created the first satellite-to-ground quantum network, in the process smashing the record for the longest distance over which entanglement has been measured. And they’ve used this quantum network to teleport the first object from the ground to orbit.

The connection known as quantum entanglement, has a remarkable power. It enables someone holding one of the particles to send, instantaneously, a chunk of information — the “unknown quantum state” — to someone else holding the other particle. Because of that weird quantum connection, the information goes from one person to the other without physically passing between them. It arrives without traveling.

While it has proven possible to teleport one or more qubits of information between two (entangled) atoms, this has not yet been achieved between molecules or anything larger.

So what does the future hold for molecular transportation?

Teleportation has now become a standard operation in many quantum optics labs around the world. The technique relies on the strange phenomenon of entanglement. This occurs when two quantum objects, such as photons, form at the same instant and point in space and so share the same existence. In technical terms, they are described by the same wave function.

Note a fascinating common thread through all these possibilities. Whether you regard yourself as a pile of atoms, a DNA sequence, a series of sensory inputs or an elaborate computer file, in all of these interpretations you are nothing but a stack of data. According to the principle of unitarity, quantum information is never lost. Put them together, and those two statements lead to a staggering corollary: At the most fundamental level, the laws of physics say you are immortal.

Professor Michio Kaku of City University, New York, maintains the technology to teleport a living person to another part of the Earth or even space could be available within decades – or at least by the next century. Prof Kaku, known as Mr Parallel Universe for his futuristic claims, which also include the possibility of real time travel and invisibility, has studied various sci-fi technologies deemed impossible and concluded some will eventually happen.

“Quantum teleportation already exists. In fact, we took a film crew and went to the University of Maryland and actually filmed an atom being teleported. It zapped across the room from one chamber to another. So at an atomic level we do it already. It’s called quantum entanglement.”

This is a process that allows connections (like an umbilical cord) to be formed between atoms and their information transmitted between others further away.

Professor Kaku said: “I think within a decade we will teleport the first molecule.”

The problem is that the whole basis of teleportation is translating something physical into data, sending it somewhere else, and then re-assembling it. The quantum entanglement system used to teleport an atom, would be virtually impossible in terms of time and survival for anything alive. There are trillions of atoms in the human body, meaning a person would have to be broken down into individual ones before each were entangled, read, digitised and teleported, before that whole process were done in reverse to bring them to the new location.

So there we have it. Things will move in small steps, but they will move. Transportation of a single molecule is the next giant step!!