Today I welcome a guest blog by author J L Stowers on her new book The Cost of Survival. Read and enjoy.

J L Stowers grew up in a small town in south central Idaho. Living amid the lava fields offered a childhood full of exploring and day-dreaming. The desert became the place of inspiration for many tales.  Throughout life, J. L. was always drawn to the stars by a love for all things science fiction. Genesis Rising, the science fiction adventure/thriller series launched on Amazon with Project Genesis, a short story prequel to the series. The first book, The Cost of Survival launched October 1st. 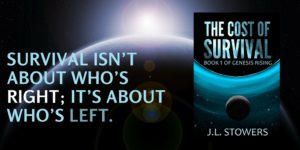 The Cost of Survival

The Cost of Survival is a science fiction thriller exploring the dark side of human nature from a world on the brink of destruction.  Author J. L. Stowers asks the question, “What if humankind could no longer reproduce?” The answer is shockingly disturbing, but perhaps not too far from the truth if our dark history repeats itself.

The main character, Walt Marshall, is cynical and distrustful of the very government who hired him. Yet he can’t say no to a once in a lifetime mission to a remote area devoid of the masses and their overwhelming use of technology. He makes his new home outside a military camp in a war-torn valley in hopes to restore the area to its once fruitful nature. However, Walt quickly realizes things aren’t what they seem.

Walt stumbles upon an unspeakable secret regarding the truth as to why this valley was selected for colonization. Readers are emerged in Walt’s journey and internal conflict. The closer he gets to finding answers, the more he’s reminded of the emotional anguish he tried to leave behind.  His path to the truth leads through espionage and treason all while forcing Walt out of his comfort zone. The long-time loner is forced to trust and rely on the people around him in order to uncover the facts.

This story is filled with twists, turns, and symbolism to keep readers on their toes. However, the best thing the first book in the Genesis Rising series has to offer is a glimpse at the lore fueling the trilogy. In the short story prequel, Project Genesis, we witness the discovery of the Genesis documents and the formation of the secret organization behind the translation. In The Cost of Survival, Walt Marshall experiences the mysterious language once more. We learn some of the information uncovered in the Genesis documents and more will be revealed throughout the series.

This incredible journey will take readers beyond what they’ve expected and it all starts with learning the secrets within The Cost of Survival.

Buy The Cost of Survival on Amazon here.