The Emu and the Orange

THE EMU AND THE ORANGE 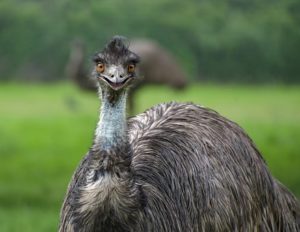 Sue was about a hundred clicks from Ceduna and running late. Ahead, a fierce golden sun challenged the dark, brooding clouds which temporarily held hands above the horizon. Rain tomorrow? Probably not, she thought.

At thirty-five, with short blonde hair, steel grey eyes and a body honed by early morning jogs, she had been the quintessence of determination at the start of the journey. She had actually smiled as the old 4WD moved off, and even waved a middle finger at the imaginary figure of Tony which had stood in front of the bonnet. Freedom at last. Hallelujah!

Now, some two thousand kilometres and a torn map later, she was fuming. Nine months they had been an item. Made for each other, Tony had said. He was enthusiastic about the trip when she first mentioned it: a drive across the Nullarbor, the great Australian motoring challenge. What could be better for knitting a relationship together? But two weeks later the jerk had backed out.

Well, eff you, she had thought. I’ll go on my own. So here she was, driving solo, and hating every minute of it.

There was a sudden movement on the verge. Something ran out in front of the 4WD, a blur on two legs.

Sue braked hard. Except she didn’t. The pedal didn’t go down!

There was a thump as the vehicle hit whatever it was. Sue kept pumping the brake. Nothing! She yanked on the handbrake and the rear wheels locked. The 4WD, groaning and moaning, slewing and sliding, ground to a halt. She could smell burning from the rear brakes.

Sue gripped the wheel and swore.

Opening the door, she got out and looked inside. Bloody hell! There was an orange underneath the brake pedal – well, what was left of one. It was split now, sporting a nasty skin wound.

How the hell had it got there? Dropped from her bag, she guessed.

She retrieved the offending item, caught the tang as she threw it as far as she could into the surrounding bush. Bloody thing! Take that.

I’ve hit something! She looked back down the road. There was a shape on the blacktop. She approached it slowly. Kangaroo? Wombat? Neither. An emu.

As Sue approached, the bird tried to rise. It did not succeed and fell back. A broken leg, somewhat akimbo, the amateur vet in Sue diagnosed. Other than that, it seemed okay. Another attempt to rise. Another collapse. A grunt.

Sue knelt next to it. The avian head swiveled, beady eyes full of accusation.

The head and its neck sank to the ground. A stubby wing flapped feebly. The good leg scrawled across the road surface, as if trying to scribble a message. Sue’s eyes ranged over the bird. The only damage seemed to be the leg. Even so, the bird was doomed in the wild.

“I have to get you off the road,” Sue said. “Don’t want you to become roadkill.” Then she added: “No. I need to get you into the car.”

The head turned; the beak pecked at her hand.

She rose and ran back to the 4WD, moved it to protect the bird from oncoming traffic. Just in time as a car came throttling down the highway.

Sue ran at it, waving it over to the other side of the road. It passed, horn blaring. Bastard, Sue thought. I could be marooned out here.

She went back, looked at the bird. The bird looked at her. Such piercing eyes. She wondered whether it was in shock. How can I lift it into the car? It’s at least fifty kilograms.

She needed somebody else. She looked both ways. Nothing. Why hadn’t the other car stopped? People didn’t care these days.

Another motor sounded in the distance. Sue ran and switched on her headlights, sprinted into the other lane to wave the approaching vehicle down. This time she would stand her ground.

It was a truck, a big one. It would take forever to stop. If it did stop. She held her position.

It stopped, air brakes screeching. A voice rang through the air: “You in trouble?”

“An injured bird,” Sue called back. The guy was still in his cab.

“You stopped for roadkill?” Disbelief threaded the voice.

“I hit the bird,” Sue responded.

The driver dropped from his cabin, walked over, looked at the emu. He was in his sixties, Sue thought. Grey hair, skinny, small to be driving such a big rig.

“Do you want me to wring its neck?” the man asked.

“No, I bloody don’t,” Sue replied testily. She gestured to her 4WD. “I want you to help me lift it in the back.”

“It’ll have your eyes out,” was the only response she got.

She took a deep breath. Perhaps she should cut and run, leave the poor thing to the roadkill statistics.

The bird struggled to rise, gave up, flopped.

He started to walk to his rig. Last I see of him, Sue thought.

He returned, waving a large glove. “For over its eyes.”

And it worked. Together, awkwardly, blasphemingly, they manhandled the wounded bird into her vehicle. Sue closed the tailgate.

The man held out his hand. “Sam,” he said as they shook hands. “Sue,” Sue replied.

The driver turned and walked away. “Good luck,” he said. “Probably be dead in the morning.”

The truck roared and went on its way.

“No response from the vet, just an emergency number out of town.” The motel manager looked at Sue, eyebrows raised, bristling with helpfulness. “There’s a fauna rescue place nearby. Should I call them for you?”

The manager was scribbling something down. She thrust the paper at Sue as she put the phone down. “Here’s the address. It’s okay to go now. Just down the road on the left. I’ve drawn a rough map.”

And she was on her way, map in hand, wondering why the hell she was doing this.

Dusk had fallen and she approached the old weatherboard with trepidation. There was a light in the porch, somehow welcoming. She rang the bell.

And Tony answered the door! Or someone who, backlit from the hallway, resembled Tony.

His grip was warm and firm as they shook hands. Together they brought the bird inside, placed it on a table.

This man had grey eyes, identical to her own. As he inspected the still-gloved emu, she felt in awe of his gentleness. He was built like Tony: tall, wiry, even carried a dimple in his chin. Probably early forties.

“How did it happen?” Sam asked.

She told him about the orange, the blaring horn, her aged knight in shining armour.

“I’ll sedate and set,” Sam said. “Can you help, Susan?” He looked at her, eyes searching hers. It was like looking into a mirror.

Then she noticed the photograph on the wall. A man and his truck. No doubt on the Nullarbor. And no doubt it was the old man who had helped her.

“Who’s that?” she asked, pointing at the photo.

“My father,” Sam said. “He passed away last year.”

Sue felt her knees go weak. She grasped the table for support. Coincidence? It had to be. There was no such thing as ghosts, let alone ghost trucks.

“You’ll be staying in Ceduna a while then?”

Sue took a deep breath, looked at Sam. From now on she was Susan, she decided. And there was no way she was leaving Ceduna.

And there was no way she was leaving this gentle soul of a man.