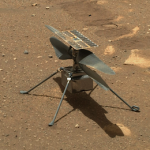 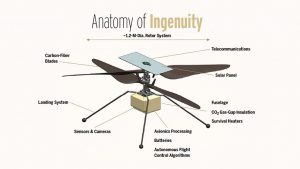 If anyone had told me a few years ago that there would soon be a helicopter flying on Mars, I would have thought them crazy. But now, in 2021, we have such an event happening. Sure, it’s a small vehicle, but it is extremely useful, and a probable forerunner of things to come.

Makes me wonder how large a helicopter system would have to be to lift a human into the ‘air’ on the red planet. Anyone done the math?

Probably better to rely on the Jet Packs as described in last month’s blog: FLYING HUMANS

Anyway, back to the Martian helicopter.

What is the Martian helicopter?

The vehicle is called Ingenuity and has a mass of only 1.8 kg. It is the lightest artificial object on Mars. The small craft carries a piece of fabric from the wing of the Wright Flyer, the Wright Brothers’ airplane, which was humanity’s first controlled powered heavier-than-air flight on Earth. A nice touch.

The helicopter uses contra-rotating coaxial rotors about 1.2 m (4 ft) in diameter. Its payload is a high resolution downward-looking camera for navigation, landing, and scientific surveying of the terrain. There is also a communication system to relay data to the Perseverance rover.

The solar-charged battery-powered coaxial drone rotorcraft is serving as a technology and operations demonstration for the potential use of flying probes on future missions to Mars. No need to stop there though, as the technology could be applied to other ‘friendly’ worlds with an atmosphere also.  The potential to scout locations of interest and support the future planning of driving routes for the rovers is paramount to its missions.

You can check out a couple of Ingenuity videos here that include flight footage [Skip the Ads if you find them annoying]:

VIDEO ONE   AND  VIDEO TWO

The Ingenuity technology demonstrator will likely form the foundation for the development of  more capable aircraft for aerial exploration of Mars and other planetary targets with an atmosphere. The next generation of rotorcraft could be in the range between 5 and 15 kg (11 and 33 lb) with science payloads between 0.5 and 1.5 kg (1.1 and 3.3 lb). These potential aircraft could have direct communication to an orbiter and will not necessarily associate with a landed asset. Future helicopters could be used to explore special regions with exposed water ice, where microbial life could potentially survive.

Mars helicopters may also be considered for fast retrieval of small sample caches back to a Mars ascent vehicle for return to Earth such as the one to be launched in 2026.