Most people are asked if they believe in UFOs at least once in their lifetime. Usually it sounds like “Do you believe in Father Christmas?” coming from a young all-knowing child, with the same note of incredulity attached. It is a simple question, but the wrong one. Perhaps a better question would be: do you entertain the possibility we are not alone in the universe? This could be followed up by: do you think it’s possible we may be being visited by extraterrestrial beings? Neither question requires full commitment, even though they have a simple ‘yes’ or ‘no’ answer.
Many people, in order to give the impression that they are completely sane with no instability attached anywhere to their meandering thoughts, will answer ‘no’ to both questions, give the questioner a disdainful glance, and wander off with nary a glance backwards.
Wiser people would perhaps say ‘maybe’ or ‘anything’s possible’. Then they would reflect the question back on the questioner. That can be tricky. They will, in all likelihood assume the questioner believes in all things UFO, including abductions, medical inspections and memory losses. A wise questioner would say ‘I agree with you. It’s best to have an open mind’.
There will be, of course, a minority who will say ‘yes’. The questioner will then look in their eyes and ask ‘why?’ The answer to that will be ‘because the universe is large and we are small and anything can happen’ or words to that effect. And that is probably true.
There will be a very small minority who will claim to have seen a UFO, or at least something they could not explain. There may even be someone who claims to have been abducted. That’s when the questioner might want to walk away with nary a backward glance. But more on claimed abductions in future blogs.
But what has a person who claims to have seen a UFO in the sky really seen. According to the authorities there are numerous explanations. Some of these are the planet Venus, meteors, lenticular clouds, ball lightning, weather balloons, satellites, and aircraft. The addition of drones of all shapes and sizes, can only serve to confuse the matter further. 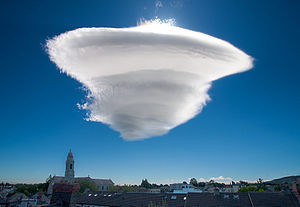 Now sure, it has a neat UFO type shape, albeit not perfectly symmetrical. However, I don’t think it has any great speed attached to it. I mean it will not hang around for long, but it will not zoom off into the distance at a great range of knots. It will dissipate.
No one who stares at a lenticular cloud for any length of time will assume it must be a UFO.

To my way of thinking, for a UFO sky sighting to be considered as a ‘valid sighting’, the object in question must be unidentifiable and:

I don’t think any of the authorities explanations hold water against both the above points put together. Venus, lenticular clouds and weather balloons obviously do not; meteors, satellites and ball lightning do not change direction rapidly. Only our own military flight vehicles serve both stipulations, but they not do it rapidly.

So where does that leave us? Probably with more enigmas than ever.
Next time I’ll be looking at the preponderance or otherwise of UFO sightings.