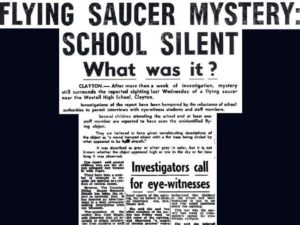 Last month I mentioned that I would blog about the Westall High School UFO incident that occurred on April 6 1966 in Melbourne, Australia. So, not wanting to delay the issue, here it is:

The Westall High School UFO incident is arguably the most famous UFO event that has happened in Australia. Despite that, there is precious little publicity or data surrounding the episode. This is primarily because the ‘authorities’ came down on it like the proverbial ton of bricks. The fact that there were hundreds of witnesses, many of them children, adds a great deal of credence to the story. Witness interviews some 50 years later reflect the same mystery.

In 1966 over 300 children and staff from a Melbourne school reportedly witnessed multiple UFOs flying through the sky then landing in a nearby field. It remains the largest mass UFO sighting in Australia. Save for a few local papers, very little was reported at the time.

An Australian UFO researcher and photographer, James J. Kibel, conducted an interview with a science teacher from the Westall school, Andrew Greenwood, who witnessed the event. “Greenwood told me the UFO was first brought to his attention by a hysterical child who ran into his classroom and told him there’s a flying saucer outside,” Mr Kibel said.

“He thought this child had become deranged or something so he didn’t take any notice. When the child insisted that this object was in the sky he decided to go out and have a look for himself.

When he went outside he noticed a group of children looking towards the northeast area of the school grounds. As he approached them he claims he saw a UFO hovering close to the power line. Mr Greenwood described it as a round, silver object about the size of a car with a metal rod sticking up in the air.”

According to Mr Kibel, the teacher then told him five planes came and surrounded the object as more people began gathering to watch the scene.

“The planes were doing everything possible to approach the object, and he said how they all avoided collision he will never know. Every time they got too close to the object it would slowly accelerate, then rapidly accelerate and then move away from them and stop. Then they would take off after it again, and the same thing would happen.”

This game of cat and mouse reportedly went on for about 20 minutes and by now 350 children and staff were watching on.

Suddenly the UFO shot away and vanished within seconds, and it was at this point the headmaster came out and ordered everyone to go back to class.

At the time and over subsequent years there were reports that the government tried to cover up the incident and stop witnesses from talking.  Mr Greenwood claimed it was the headmaster that first tried to quash discussion of the incident.

“He gave the school a lecture and told the children they would be severely punished if they talked about this matter. He also told the staff they could lose their jobs if they mentioned it at all,” Mr Kibel said.

The teacher claimed the headmaster was so “scared” and “disturbed” by the incident that he had refused to come outside until the object was gone.

There have been claims from several witnesses that smartly dressed men in black suits visited them and warned them from speaking about the incident.

At first glance it would appear that the headmaster was under instructions [probably by phone] to quash the incident as soon as possible, perhaps even before the ‘authorities’ arrived at the school.

Since the incident occurred there has been worldwide speculation about what people saw. Some people believe it was indisputably an alien encounter. Others say it was the government testing new technology – a par for the course explanation. But this was Australia in 1966 and no such vehicles with such capabilities have been shown or seen since. As far as I am aware the only flying military vehicle Australia was producing at the time was a target unmanned aircraft named Jindivik.

The ‘authorities’ arriving at the school are well described by witnesses in the linked videos below. The ‘authority’ response was swift – almost too swift for it to be a ‘normal’ incident. And the claim by the children that they were bullied into keeping quiet is disturbing.

The five plane scenario also has me puzzled. These were not military jet aircraft but light planes from a nearby airport. Why would five pilots be available and allowed to take off and chase a UFO, even if they wanted to?  How did they get permission to buzz the intruder? Did they get a phone call to check out the UFO as they were the nearest available?

The following videos, with interviews with the children as adults, are most enlightening.

Video documentaries on the incident

Start with this one: A good Channel 10 interview [19 minutes] with three of the children, now adults, which sheds further light on the incident, including information about a missing child who was first on the scene.

And a 2010 documentary [49 minutes] which takes you through the whole scenario:

Also a 2005 investigative report on the Westall UFO:

This event is a real puzzle, but probably not to dissimilar to other high level UFO events. What annoys me most of all is the inability of the ‘authorities’ to admit that they do not know what the vehicle was, or what it was doing. They mostly always have some kind of explanation, sometimes quite absurd, for the incident.

If this was a craft from a non-human intelligence, witness descriptions suggest:

All of the above suggest that the UFO[s] was a surveillance drone or unmanned aircraft of some type. The fact that this was Australia in 1966 also suggests that the vehicle was alien or foreign in origin. As no similar vehicles have been announced or visited upon the public by any country in the world, the question of where it came from remains unanswered, but it may not have been terrestrial.

I believe this incident will always remain a mystery, but it definitely happened. The number of credible witnesses guarantees that!

We are leaving UFOs in our wake next month, and blogging about dogs and their wonderful senses, some of which leave humans in their wake. See you then.