I am leaving the Mars Odyssey 2030 blogs for a short while and returning to the category of UFOs this month. One of the things that intrigues me about alleged UFO sightings is the disparity in the shape, size and overall appearance of the objects seen in the sky. You can check out the full range at this link: http://www.ufocasebook.com/ufooddshapes.html
They certainly appear to come in all different shapes and sizes, ranging through cigar-shaped, discs or saucers, crescent, triangular or even V-shaped. Today, I am going to look at triangular UFOs. 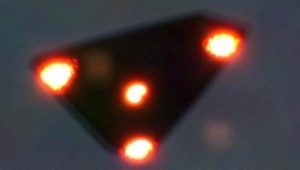 The earliest known reports of these unusual triangles can be traced to the Dutch East Indies in the late 1890s, around 10 years earlier than the Wright Brothers’ first powered airplane flight in 1903. Triangle UFOs were also reported from Scotland and England in 1895.
UFO Casebook

Up to last century

Since 1990 there have been over 4000 sightings of what is known as the “Flying Triangle” or “Silent Vulcan” over Britain alone. Vulcan was a cold war British bomber designed in a triangular or delta shape. Similar sightings were witnessed in other European countries and sometimes aircraft were sent up to intercept. It was reported that people were seeing flying vehicles “as big as a football field”. Usually there was no noise. Another claim was the sighting of “a huge black triangle rising out of the water”. Ufologist Nick Pope has written a book about many of these sightings including one over several Army bases in one night. Nick used to run the British Government’s UFO Project and is one of the world’s leading experts on UFOs, the unexplained and conspiracy theories. Nick Pope
Here’s one is more famous quotes.
The skeptics have to be right every day, but the believers only have to be right once.
One can think of extraterrestrial visitation as being the ultimate low probability high impact event.

You can hardly disagree with that.

Reports generally describe this class of UFO as a large, silent, black triangular object hovering or slowly cruising at low altitudes. Sightings usually take place at night. These objects are often described as having pulsing coloured lights that appear at each corner of the triangle. Black triangle UFOs are often reported to be visible to radar, as was the case with the famous Belgian UFO wave in 1989 and 1990. On one occasion, two Belgian F-16s attempted to intercept the objects (getting a successful missile lock on two occasions) only to be outmaneuvered; a key conclusion of the official report was that no attempt should be made on the part of civilian or RAF Air Defence aircraft to outmaneuver these objects except to mitigate the risk of collision. The entire Belgian UFO wave, however, has been disputed by skeptics. The truth, as always, is hard to get at.

The Kenosha UFO wave began in December 2016. The events of 17 February 2017 were documented by various groups of witnesses. The reports portrayed multiple dark triangular objects in the sky with blinking white and red lights, at around 6:30 pm. A craft was also seen on 19 January 2017 at around 5:00 am hovering just above the ground. This object was described as dark on the bottom with lights, and silvery on top. Other sightings include 28 December 2016 at around 8:00 pm, and 24 January 2017 at around 9:00 pm. These multiple sightings beg a lot of questions.

So what are they?

We can let our imagination run amok when pondering what these strange vehicles could be. If they are piloted, are the crew at the front with their power generation aft [as most modern jet aircraft], or could it possibly be totally different? Or are they not manned at all?  They are rather large, by our standards, for an unmanned craft. If they are not manned what are they carrying in such a large superstructure?

Accounts of enormous triangular UFOs are being reported every week, backed up by dozens of videos, and even more photos and drawings. Triangular UFOs have been spotted all over the world, with notable sightings documented in California, South Carolina, Texas, Buenos Aires, Maryland, Virginia, and the United Kingdom. One witness in Illinois even wrote in to MUFON [Mutual UFO Network] about how they experienced missing time after watching multiple triangle crafts eerily survey their campsite. Mufon site

If triangular vehicles belong to the US government, as some UFO researchers and witnesses suggest, why has there been such an increase in sightings? It is unlikely the US government could be operating a secret space program. And certainly not for the last one hundred years! Maybe there are secret space missions going on above our heads right now! On the other hand, if triangular crafts are not man-made, could extra-terrestrials or inter-dimensional beings be visiting?

Although customarily dismissed in any official capacity, the large number of reports of these objects collected over the years, seem to make a case for the existence of some variety of aircraft. Their origin, human or elsewhere, remains a mystery, as does their ultimate purpose of operation. And purpose is the most critical question of all.