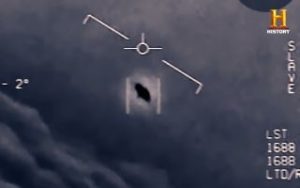 After a somewhat tongue-in-cheek look at UFOs, aliens, and Area 51 in last month’s blog, it is probably a good idea to get back to more serious UFO sightings.

By virtue of their operating in Earth’s atmosphere, and the sheer number of flights, both civil and military, I thought it would be interesting to check out recent UFO sightings from aircraft.

Each year, there are millions of commercial flights around the world, and thousands of aircraft in the sky at any given moment. With that many observers in the skies, it is no surprise that some of the most stunning UFO sightings have been reported by airline pilots. In November 2018 there were several sightings of a UFO over Ireland. This was seen by at least four pilots. A Virgin pilot reported that his flight crew had seen “two bright lights at 11 o’clock, which seemed to bank over to the right and then climb away at speed.” It was later stated by authorities that they were most likely to be components of a meteor. However, Air Traffic Control told the Irish Times newspaper that nothing had appeared on either primary or secondary radar.

Dr. Chris Lowe, a skeptical UFO expert and enthusiast, told Euronews: “In all probability, it was a meteor or other bits of space junk re-entering the Earth’s atmosphere. The fact that it was fast, glowing and at a low angle trajectory is typical of this.” However, he said aspects of the reports were more unusual.

One of the pilots said the ‘objects’ tracked the path of the plane, to the side — but then  ‘veered off’. A meteor would normally maintain its trajectory unless deflected (after an impact or collision) — and it would not change direction. See previous blog.

Lowe said that there have been an “escalating number of fairly convincing reports of flying discs and triangles which appear to defy current technological ability, and the laws of physics, over the past couple of years.  Many of these have been observed by high-value, likely-reliable witnesses, including military and civil pilots, navy personnel & police officers.”

In a similar manner, as reported in Live Science: Two airline pilots spotted a mysterious, reflective object hovering some 40,000 feet over southern Arizona, and the Federal Aviation Administration (FAA) is bemused. According to radio transmissions between the pilots and air traffic controllers (which you can listen to in full, as there is an FAA recording recently released to the Phoenix New Times), the sighting occurred around 3:30 pm local time on Feb. 24 2018, somewhere over the Sonoran Desert near Phoenix. Click here to listen in:

“Was anybody above us that passed us like 30 seconds ago?” the first pilot asked as he flew a Learjet west toward California.

“OK,” the pilot responded. “Something did.”

The object was flying high — at least a few thousand feet above the jet — the New Times reported. A few minutes later, the FAA asked another nearby flight — an American Airlines Airbus traveling in the same direction — to keep an eye out for anything passing over it.

The Airbus pilot agreed. Within a few minutes, the Airbus crew saw the same mystery object fly over their plane.

This report comes just a few months after a former Pentagon official revealed that the government has been quietly running an official UFO detection program since 2007. An investigation into the program by The New York Times turned up striking footage taken by two Navy fighter pilots, who appear to encounter a mysterious glowing object midair.

Reports like these may be more common than you imagine. According to the National UFO Reporting Center — an online database of alleged UFO sightings in America — there were nearly 650 UFO sightings reported in 2018. However, the website advises, “Many of the new reports have been submitted by individuals who elect to remain anonymous…we encourage visitors to our website to be discriminating in what they accept as accurate and reliable.” See NURC.

Recently military pilots have been actively encouraged to report any UFO incidents. And these guys are trained to be cool-headed, factual observers.

For the last several years, the U.S. military has observed an increase in what it calls “unexplained aerial phenomena.” The rest of us know them by their more common name — unidentified flying objects.

The Washington Post says well-trained military pilots “claimed to observe small spherical objects flying in formation. Others say they’ve seen white, Tic-Tac shaped vehicles. Aside from drones, all engines rely on burning fuel to generate power, but these vehicles all had no air intake, no wind and no exhaust.” They also appear to exceed all known aircraft in speed. They have been described by a former deputy assistant secretary of defense as embodying a “truly radical technology.” REFERENCE
For example: Between 2014 and 2015, seasoned pilots in the U.S. Navy experienced a number of encounters with UFOs during training missions in the U.S. While pilots were mid-flight, their aircraft cameras and radar detected seemingly impossible objects flying at hypersonic speeds at altitudes up to 30,00 feet (9,144 meters). These mysterious UFOs did so with no visible means of propulsion [New York Times report on May 26 2019].
“The objects had no distinct wing, no distinct tail, no distinct exhaust plume,” said Lt. Danny Accoin, one of the Navy pilots who reported UFO sightings beginning in 2014. “It seemed like they were aware of our presence, because they would actively move around us.” Lt. Ryan Graves, an F-18 pilot, said that a squadron of UFOs followed his Navy strike group up and down the eastern coast of the U.S. for months. And in March, 2015, after the carrier Roosevelt was deployed to the Arabian Gulf, Graves said the UFOs reappeared.

In 2015, following this spate of UFO sightings, the U.S. Navy issued official guidelines for personnel to report and investigate aerial objects, according to The Times. Those Navy protocols were updated earlier this year; all data will be classified information and will not be made available to the general public.

So it seems officialdom is now taking unexplained aerial sightings seriously. And the more ‘official’ reporting of sightings become, the more witnesses will come forward. Nowhere is it being suggested that living entities are within these apparitions, but they could certainly be from advanced intellects, either from on Earth or outside our perceived surroundings. It all remains a mystery, but one which requires vigilant monitoring.