How many alleged UFO sightings have you seen reported on the news lately? Chances are the answer is probably none. In fact I have to go back many years to recall an event which was given a few seconds of news time on mainstream TV channels. And then there was no follow up. Why is this? Have actual sightings stopped? Or have any alleged visitors got smarter at deception? Or are reports being given no publicity traction for fear of ridicule? This is understandable as there are many hoaxes out there, all of them stupid and absolutely pointless – about as useful as hens’ teeth, and saying much more about the perpetrator than any high court judge could. I put hoaxes into the same category as unfounded conspiracy theories, but not to say that because there are many hoaxes the UFO enigma does not exist. In fact, there are many serious and bona fide organisations who collect and publish data on a regular basis. At the end of the day it all depends on the honesty and dependability of the witnesses, as it does with any major incident. With most people owning a mobile phone with camera, surely reports of sightings must have increased over the last few years. Not on the news channels but …

There have been 90,000 credible UFO sightings since 1905, according to the National UFO Reporting Center in the USA, and a new interactive map on the Metrocosm web site displays each of them [see link to web site at end of blog]. The UFO Sightings Map displays each sighting of as a circle, with the size representing the number of reports received by the Reporting Center. The larger the circle, the more people reported seeing that UFO, and as users zoom in on their favourite city, more circles are revealed. The map also uses pictures and video from the Mutual UFO Network, the world’s oldest investigative body.
For the past 20 years, sightings have been growing at a pretty steady rate of about 350 additional reports each year. A picture is as good as a thousand words, so: 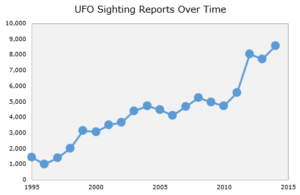 And in Australia we have a typical sighting:
Gold Coasters were looking to the sky after a series of UFO sightings over a weekend in September 2015. No reports of unusual activity within local airspace were made by local authorities. According to one witness: “Its colour changed from green to yellow and finally to red and my housemate and I saw what looked like a plane going down and waited for news of a plane crash but nothing came. I went out back to have a smoke and looked up in the sky and the light appeared as bright as the evening star and flashed again before disappearing.”

With the advent of drones and their increasing popularity, UFO sightings at night are no doubt set to increase even further. Maybe it’s time for more Second Kind events! Here’s a video of an Australian sighting which could very well be a human controlled drone.

THE BOOT ON THE OTHER FOOT

It would be interesting to think about how humans would approach a planet with known advanced intelligent life. Would we announce ourselves and hope for the best? Would we land with all lights blazing? Would we just land, as ancient Earth explorers did on foreign shores? I do not think so – the old explorers like Cook, Columbus, Cortes and Magellan were armed with an unbelievable sense of superiority, of infallibility even. They were the peak of human technology and they knew it. Not so us going to an alien planet. Caution would have to rule. How would we engage – quickly or gradually – or not at all? A fascinating topic for the next UFO blog.

For those interested in keeping up with UFO events, some of the more serious sites in the USA and Australia are listed below: