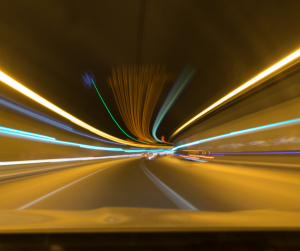 Anyone who has read Science Fiction books will be familiar with the concept of faster than light speed travel and warp drives. But how near is mankind to getting anywhere near this writers’ castle in Spain. And how on Earth would the human body cope with such extravagant speeds and such a mind-boggling experience. Would we have to change physically in order to survive? And how would we return? It’s the stuff of dreams – and nightmares.

How fast can humans travel?

Humans have already traveled many times faster than Mach 5. But is there a limit beyond which speeding human bodies can no longer bear the stress of extremely fast travel?

The current human speed record is shared equally by the trio of astronauts who flew NASA’s Apollo 10 mission. In 1969, returning from a lap around the Moon, the crew’s capsule hit a peak of 24,790mph (39,897km/h) relative to planet Earth. As far as I am aware this record still stands today. Everything must be relative to our planet. It’s the only datum point we have currently. And we must bear in mind that rapid acceleration and deceleration can be fatal for the humans.

So how to get there?

Three of the most promising means – using contemporary conventional physics – for achieving reasonable interplanetary travel speed are the energy-releasing phenomena of fission, fusion and antimatter annihilation.

Currently, the best case for powering fast spacecraft is antimatter. With antimatter-fuelled engines, spacecraft could accelerate over long periods of time, many years even,  to very high percentages of the speed of light, keeping G levels tolerable to occupants. These fantastic new speeds, however, would usher in fresh dangers for the human body.

At several hundreds of millions of kilometres per hour, every mote in space, from hydrogen gas atoms to micrometeoroids, becomes a high-powered particle bombarding the spacecraft. At speeds around 95% of light, the exposure would be deadly. The star ship would heat up to melting temperatures for today’s materials, and water in the crew’s bodies would promptly boil. Some kind of protection will be required.

One faster-than-light scenario works like the warp drive popularised  by Star Trek. Called an Alcubierre drive, it involves compressing the normal space-time described by Einsteinian physics in front of the star ship, while expanding it behind. The ship resides within a cage of space-time—a warp bubble—that moves faster than the speed of light. The ship remains at rest within its pocket of normal space-time, avoiding any violation of the universal light-speed limit.

Two recent papers—by Alexey Bobrick and Gianni Martire, and Erik Lentz—provide solutions that seem to bring warp drives closer to reality. Bobrick and Martire realised that by modifying space-time within the bubble in a certain way, they could remove the need to use negative energy. However, this solution does not produce a warp drive that can go faster than light.

Independently, Lentz also proposed a solution that does not require negative energy. He used a different geometric approach to solve the equations of general relativity, and by doing so, he found that a warp drive wouldn’t need to use negative energy. This solution would allow the bubble to travel faster than the speed of light.

These of course are theoretical solutions. But they are a step in the right direction.

In his spare time, NASA engineer David Burns has been developing an engine concept that would theoretically accelerate to 99 percent of light speed without using propellant. “The engine accelerates ions confined in a loop to moderate relativistic speeds, and then varies their velocity to make slight changes to their mass. The engine then moves ions back and forth along the direction of travel to produce thrust,” he wrote in his abstract.

Burns acknowledges that there is an efficiency problem with the system, and also adds that his work hasn’t been reviewed by experts, and there may be errors in his maths.

We don’t exactly have the blueprints for a fully functional space travel engine here. What we do have is a piece of groundwork that could be used to develop such an engine. What we have is a dream of the stars.

It is likely that the kind of technologies that could enable fantastic interstellar speeds would also present new ways of protecting crew. Just as it has done with altitude and near-Earth flights. However, the research and development timescales involved to reach practicality are almost as unimaginable as journeys to the stars themselves.

The fact that some of the best brains on Earth are working on the possibilities is amazing. There is a long future ahead for the practicalities, but is seems that the theories are getting closer to realising Ultra High Speed Space Flight.