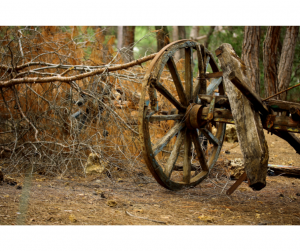 At first glance, the wheel seems a rather innocuous object, obvious, and something we all use, in one form or another, everyday of our lives. But, in fact, they haven’t been around all that long compared to man’s tenure on planet Earth. So how did it all begin, and why did some civilizations not even bother?

Wheels appear to be a prime example of a primitive level technology. But in fact, they are not.  They required so much innovative thinking  that it took until around 3500BC. for them to be invented.

They appear to have been first utilized in the 4th century BC in Lower Mesopotamia [modern day Iraq]. The Sumerian people inserted rotating axles into solid discs of wood. It was, in fact, only in 2000 BC that the discs began to be hollowed out to make a lighter wheel.

The concept of the wheel is present in ancient Greek and Roman mythology – the wheel of fortune belonging to the Goddess of Fate Fortuna. Chariots also spring to mind. Egypt and Turkey were the first to use the spoked wheel in 2000BC, allowing for much faster speed.

The next rolls of the dice

The wheel is not found in nature, unlike many of mankind’s inventions. So, therefore, it could be regarded as unnatural. Maybe that is why some parts of the world did not require or even contemplate the wheel – see the next section.

The first wheeled vehicles appeared in Europe and Asia, with Europe claiming the first 2 wheeled vehicles. China appears to have developed the wheel independently about 2800BC.

Things then started to get on a roll. Celtic chariots had iron-rimmed wheels in 800-400BC. China created the first wheelbarrows in 50AD. Turnspits were used to cook meat in Britain from 1500AD. Belgium put wheels on feet for the first roller skates around 1743AD, and Scotland claims the first pneumatic tyre in 1847.

And so it went on.

Many civilizations did not produce the wheel. This is interesting, in itself. Why not? Some examples:

Although the Incas were very advanced and did know about the concept of the wheel, they never developed it in practice. This is likely because their empire spanned the world’s second highest mountain range. There were more straightforward and practical methods to carry goods than using the wheel. Who wants to push a wheel up a steep mountain pass? But in the late 19th century Inca wheels were discovered – on Inca toys.

By 1680 Indians in all of Texas and New Mexico had horses, as did many Native people. Prior to that though, the idea of traveling large distances was the last thing on their minds. The wheel is an invention linked to cultures where people and trade goods have to move relatively large distances regularly. Most indigenous traditional cultures meant that if a person had to move (say to follow seasonal game) their personal possessions would not be so cumbersome that they couldn’t be dragged or carried upon their backs.

Dogs were the only pack animals used, but since covering distance as a full village or clan wasn’t done much, the wheel wasn’t an item they really needed. Travel was done swiftly and lightly when required. Since they rarely killed too much game or destroyed the environments where they chose to live, the wheel just wasn’t born from necessity. Also, American Indians did not have wagons or carriages of any sort mainly because they did not have draft animals that would pull such wagons. There were no horses or oxen. Buffaloes and llamas made poor work horses.

Likewise for the first peoples of the Australian continent. Wheels are typically invented in parallel with the domestication of large beasts of burden. Kangaroos are not much use there. So the First Nations of Australia were on their own as regards that. Also, most lived by rivers and the coast – much better to fashion methods of travel that better suited the topography, such as birch bark or cedar dugout canoes and kayaks. They were  efficient methods of travel that were quickly adopted by the European settlers.

In addition, Aboriginal society was based on minimal “possessions” and equitable sharing of available resources. The Australian Indigenous peoples’ lifestyles didn’t rely upon material possessions or power structures. They generally traveled light and left a small footprint. Lugging wheeled carts about manually would have been a complete nightmare.

For the aboriginal societies to have wheels would make as much sense as me walking 5 miles to plant my own crops, when I can plant them 50 metres away. Or even just live of the immediate bounty in the neighborhood terrain.

Will we ever have no wheels?

For transport, quite possibly. But not for a long time into the future. Our dependence on a structure reliant upon building an equal distance from a central point, the axis, may very well reduce as AI grows, and flying cars become the norm. But the good old wheel will be around for a long time yet – maybe until we run out of lubrication technologies [or they become too expensive].