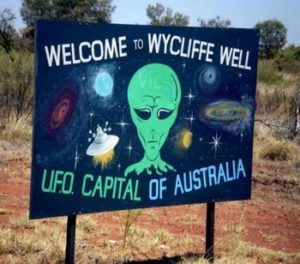 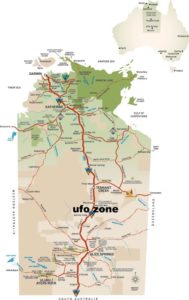 Wycliffe Well is allegedly the UFO capital of Australia. This small outback post in the Northern Territory has a small population. It is nevertheless located on a main highway from and to the Red Centre. According its own brochure, “UFO sightings are common. If you stayed up all night looking, you would be considered unlucky not to see anything, rather than lucky to see something”.

This notoriety was publicized by Lou Farkus in 1985. He apparently got the idea from an American journal which stated Wycliffe Well to be the UFO capital of the world. Staying for 25 years, Lou built a lake, an auditorium, and invested 4 million Australian Dollars into the project. He claimed the UFO idea was both good and bad for business. Sometimes people are chased into the place by strange lights on the highway, and sometimes they are chased out.

It was with the World War II soldiers that the sightings started. The folks who ran the roadhouse started to keep a log of visitors streaking through the night sky. It may be the clear horizon, this area of Northern Territory being almost totally flat, or it may just be the beer, but this remote place deep in the Australian outback is determined for you to see a UFO. And if you don’t you are just plain unlucky.

What’s it all about?

According to local folklore, UFO sightings have occurred in the Well since WWII.  The local restaurant‘s walls are covered with newspaper clippings written by UFO skeptics and believers alike. According to Lou Farkus: “Scientists say the sky is full of Ley Lines, which act like highways for the UFOs. But these energy lines must meet somewhere and one of those crossroads or intersections lies directly above the middle of Australia. That’s why we see so many UFOs here.”

Wycliffe Well is one of the flattest places in the region and allows a 360 degree view of the night skies. This allows a great vantage point to see unidentified objects in the sky. Lou originally had no interest in UFOs until he moved there. He claims that he has seen so many he no longer bothers looking for them. He just waits for visitors to report them.

Skeptics claim that many UFO sightings are conventional aircraft misidentified. Lou says: “Sure the air force do flyovers from time to time, but once you have seen their jets going at Mach One, there’s no comparison with the speed that these other things travel at. Sometimes the UFO’s travel so fast you’d literally blink to miss it.”

UFO descriptions from Wycliffe Well include the usual suspects. Cigar, Square and Rectangular shape. Square shapes morphing into circular. Pulsating and flashing lights. Orange, Green and Red spinning lights. Others that shoot out beams of different colors. UFOs have also been witnessed hovering above the ground. There was one case in particular where a “huge” craft was seen hovering 100m above the parks toilet block, only to take off at an astonishing speed.

Daytime sightings have occurred. UFO’s have also been  known to follow cars. But they seem to be generally uninterested in people, with claims of abductions being extremely rare.

Reports of alien beings are also rare apart from one account. According to Lou Farkus: “I’ve only heard of one case of someone seeing an alien form. It was from an Aboriginal woman, who said she saw a flashing object descend into the trees and then sighted three beings.”

Speculation demands that some UFO sightings in Wycliffe Well are attributed to vehicles being tested at the Woomera Prohibited Area.  This is located relatively nearby on the Stuart Highway. It is sometimes referred to as Area 52 or Australia’s Area 51.

At the time, Australian UFO Research Association spokesman Doug Moffett said in the past six months there had been an increase in reported sightings across the world, but could not explain why the Territory was lacking in reports of UFOs. “Once you get out to the NT, the western parts of New South Wales and country areas, you get a much higher percentage of close encounters,” he said. On the Sydney based group’s website only one Territory encounter last year has been listed. This was at Katherine in July.

Whether UFOs or secret aircraft, everyone is puzzled by the sudden disappearance of bright unidentified objects at Wycliffe. This is because UFO sightings are on the rise elsewhere in the world. The Australian Air Force doesn’t appear to be talking and neither are the aliens.

“Has anyone asked the Aboriginal Australians?” Judith Aisthorpe asks. They have a long history linked to the sky and may well know much more than we will ever know.

What happens at Wycliffe may be driven by tourism or ley lines or the military, but there is no doubt that it is an isolated, strange place.  In fact the most famous Australian UFO interaction was at Westall High School in 1966. This sighting had over 200 witnesses and still remains unexplained. More on that in a later blog.

And here’s more food for thought – a Google image of a triangular UFO on ground in Australia in 2008. You can also check my earlier blog of May 2017:  VIDEO 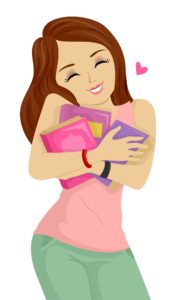 For those who don’t know already,  there is a new and free monthly magazine produced by author Hannah Howe and her team. It’s a great 32-page eMagazine crammed with Parenting Tips, Special Offers, Short Stories, Recipes, Activities for Children, Exploring New Worlds, Wellness and Well-being, New Authors and so much more…

“What is Mom’s Favorite Reads? It’s a community of book lovers. We produce a quarterly book catalogue, which features over 400 books, and a monthly magazine. Our magazines, available as eBooks, in print and audiobooks, have topped the Amazon Contemporary Women charts, the Seasonal charts and the Graphic Novel charts in America, Australia, Britain and Canada. Alongside leading independent authors our magazines also feature contributions from high profile mainstream authors. For example, in the New Year we will feature exclusive interviews with a Dr Who screenwriter, an expert on Sherlock Holmes and Terry Deary, author of Horrible Histories, one of the most popular series in the history of publishing.

Also, in 2019, we will develop our community to support literacy amongst adults and children. One of the ways we will do this is by offering schools, societies and literacy projects bundles of free books.”

This magazine is FREE and beautifully presented and well worth a look. You can check it all out at the link to MOM’S FAVORITE READS here: LINK